I was raised in Reno Nevada:

…aka, the Biggest Little CIty in the World
…aka, Sin City North
…aka, So Close to Hell You Can See Sparks. Sparks is Reno’s sister city.

This was the first school I attended in Reno: Mary S. Doten.  It was a roomy, spanish style building with lots of character.  However, after second grade a move to the end of Washington Street necessitated that I switch to a closer school.   In those days, the end of Washington Street was on the outskirts of town however today a housing tract has gobbled up the old cattle ranch where we used to ski in the winter and catch king snakes in the summer, often dodging the bullets of some old coot squatting in the tattered remains of a barn.  Yes, Reno was a little rough back then.

I have few memories of Mary S. Doten and now it is gone. Lovely old building though.

Here is Peavine Elementary.  As you can see a more modern building.  It also bordered on the aforementioned cow-dung, king snake infested cattle ranch. All through elementary school Sarah Jennis was my very best friend.  In sixth grade we practiced kissing in case we ever got boyfriends.  I suppose it was my first (and last) lesbian relationship.  But Sarah was Mormon and they have to get married and everyone knows you can’t get a man unless you’re in the popular crowd.  So just before entering junior high, Sarah Jennis dumped me for some ridiculous goon-ball with a duck-bill hairstyle who in turn she dumped when a better one came along and so on until she’d clawed her way up the slippery rungs of popularity one boy after another.  Along the way she changed her name to Sarah-Jo because the most popular girl’s name was Bobbie-Jo.  I refused to change my name to Janet-Jo and so I was out. In all other ways Sarah Jo was a smart girl and I hope she’s happily grandmothering to sixty-six off-spring somewhere in Provo.

When a best friend dumps you at age thirteen, your life is over. You’re passed down to girls who claim to be the daughter of Satan, girls who hate, hate, hate their mothers or smoke cigarettes stolen from the corner store. No one wants to be your friend.  You’ve been dumped. 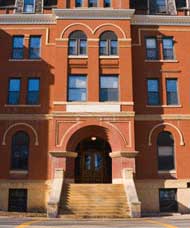 This is the building I entered alone that horrible first day back at school:  Central Junior High.  It had wainscoted halls and narrow stairs leading between the floor.  The classrooms on the upper floors were dormers.  Because it had no air-conditioning, the large windows were often left open to the sounds of downtown.

Three things happened that year which I will never forget.  The first, on a cold day in November.  I was busy scooping mashed potatoes onto plates in the basement cafeteria (poor kids worked in the cafeteria in exchange for lunch).  I had a stupid hairnet on my hair and plastic gloves on my hands, trying to be invisible, hoping no one would recognize me when I started to hear the whispers.  No, it can’t be true.  Yes, he’s dead!  You’re a liar! You’re a liar – it can’t be true.  Then, as teachers gathered in the corner talking with their heads down, we began to realize something was horribly wrong.  The bell rang and anxiously we ran to our next period class.   The announcement over the PA system was brief. 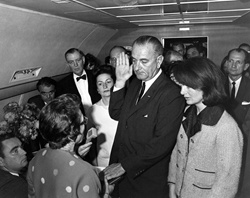 The President has been killed. School is suspended for the next three days.

My history teacher – a hard as nails ex Marine – broke down in sobs.  Some idiot child of a rabid Nixon supporter cheered for which he came within inches of a broken nose.  We walked home dazed.

The second event of consequence happened just after Christmas break.  I was in MushMouth’s fourth period English class when a sound unlike anything we’d ever heard drifted up from the PE classes in the basement.  On Fridays, PE was reserved for dance lessons, generally polkas and waltzes but every now, (as a treat for good behavior) rock and roll.   I can still remember 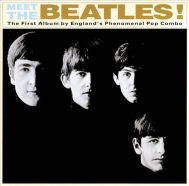 MushMouth standing at the chalkboard diagramming his heart out, completely unaware that he’d lost us forever.  It was the Beatles.  Yeah, yeah, yeah!

The third event was JoEllen, the college kid who made me aware I never wanted to be 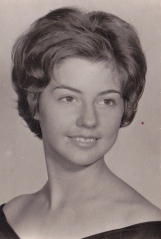 Janet Jo.  She is also the model for the Fi Butters character in FLIPKA.  And Nell in a yet to be published story.

Unfortunately Central Junior was on prime Reno real estate – only three blocks from the center of town, Harrahs, the El Dorado, the Mapes.  Real estate too valuable for the education of surly teens. The city tore it down and sold the land to Circus Circus.  Now there is a four story parking structure on the sacred spot where I first heard the Beatles.   Bad karma, City of Reno, bad karma.

The next school I went to, Archie Clayton Junior High, looked like a prison.  Brand new thus no landscaping … thus sitting in mud through most of the winter.  That’s the image I associate with that school.  Mud.  To add insult to injury, the school board hired the same principal most of us had in elementary school to run Mud School and he brought many of Peavine’s teachers with him.  I ended up with my sister’s favorite kindergarten teacher for Speech.   “Now boys and girls, I want you all to get up and give a speech about what you want to be when you grow up.

This last assignment (believe it or not) got me thrown into detention. It was the beginning of my Breakfast Club days and the first time I heard of Caliente, the girls‘ reformatory so remote, so dismal, so foreboding that girls set there never returned.  Rumors and legends about what happened to those girls haunted me for years, creating the settings and many of the characters in FLIPKA.  However, I hasten to point out, I was never sentenced to Caliente.  Close but no cigar.