Cristabel took the old woman’s arm and together they walked down to the lake.  It was a chill afternoon in mid October, only four o’clock but the sun’s warmth had already departed.  The surrounding vineyards, stark; piles of rosy leaves

round the root balls.  Winter was coming.

The old woman had to be walked round the campus every afternoon at four and then brought back in for her “martini” (sedatives)  followed by supper and cup of camomile tea.  It was the same thing every afternoon, a routine that had to be met, no questions asked.  It was boring.

Cristabel had only been working at the H 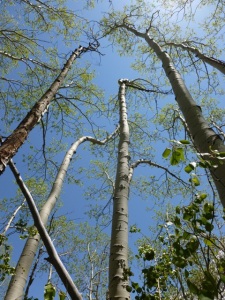 ole for a month.  At first she had a quaint notion that working for the mentally insane (as her father put it) might be fun – especially dealing with homicidal maniacs.  I mean, how cool is that! She wasn’t supposed to talk to her friends or family about the patients but who paid attention to that stupid rule?

Listen and respond as little as possible, she’d been warned regarding Mrs. White.  If the conversation veers strangely awry, walk her back inside.

“My daughter came to visit today,” the old woman said.

“Ah, don’t you get along with your daughter?”

Okay, this is weird, Cristabel thought.  “Do you want to go back in?  It’s getting cold.”

“He has part of my brain!  He took it from me but what he did the others – oh my God!  You have to call my daughter and warn her.”  The old woman grabbed Cristabel’s arms and shook her hard.  For an old woman, she was strong.  “Don’t you see?  He’ll summon her to the mountain using my brain!”  With that she broke into sobs.

Cristabel was still shaking when the doctor called her in.

“First of all.  Please relax.  You are not in any kind of trouble.  You did nothing wrong.”

“What happened to that woman?  Why is she so whacko?”

The chair was leather, stiff, expensive probably but not comfortable. Cristabel liked Dr. Butters.  She was cool.  Not like the other doctors with their beamers and Caribbean tans.  She always had candy in her office and road around in a rat-butt volkswagen with stickers all over it.  When she gave Cristabel a ride home, she never made a snide remark like “you live here?” Not like the other doctors.

“The fact is, we really don’t know what happened to her or her husband.  She was found on Mt. Shasta  by a group of hunters, in shock and suffering from hypothermia.  Her husband was never found.  Their car was also never found.  Her daughter claims they were planning to drive straight home from Portland so we have no idea why they stopped.  Maybe foul play.”

“My grandfather won’t go near that mountain.”

“Oh, I dunno.  Something about little blue men.  He’s a little goofy himself.”

Dr. Butters chuckled.  “Mrs. White hasn’t mentioned little blue men although she often talks about the bed and breakfast she and her husband stayed at.”

“Maybe that’s where their car is.”

“Oh no, Cristabel. The place she claims they stayed at was shut down and abandoned sixty years ago.”