Grandmother after more than a few vodkas.

which presented a problem for me as my father had ground into my head from early on that frowning causes your jowls to droop prematurely and if I didn’t maintain a cheerful countenance at all times I would look like my grandmother.

Riley O (in the Graduation Present) is similarly clueless as she wanders through the tiny village where her uncle lives for the first time:

“The square plots of yard, along with driveways and garages, began disappearing as I neared the center of town. Ancient stone buildings huddled together on the streets, forcing the few pedestrians—primarily middle-aged women dragging children behind them on leashes while juggling canvas bags full of produce—to walk in the road. They scowled at me as if I were a child murderer. They even scowled when I smiled at them.”

In Germany this no-no flies out the window during fest season, a two week long orgy of beer, wine, sex, and singing during which the entire country sheds its stoicism in favor of a frat party mentality. To illustrate this point, an indiscretion committed during fest season cannot be used as grounds for a divorce so if you’re going to cheat on your frau, do it in September. During these two weeks, villages scattered throughout the wine growing regions throw street parties featuring bratwurst smothered in onions and sauerkraut, tastings of the local wine and beer, and sometimes music. In the larger towns the fests are held in giant, circus-like tents with picnic tables, polka bands and beer maids in their sexy costumes. Everyone drinks, everyone sings and a whole lot of flirting goes on. 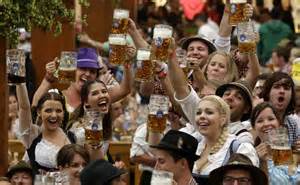 Many young people engage in the sport of “fest-hopping,” mapping out routes that’ll insure they hit the most number of beer-tastings possible.  Uncle Bob (whom the villagers called Oncle Boob after his niece Riley arrives in town) is a champion fest-hopper. In the following excerpt he is forced to re-evaluate his strategy while he and Riley await the arrival of a late friend.

He had meticulously drawn out our route the night before on a map he’d attained of all the fests in the area. He’d rated each and every one in case we weren’t able to attain his ultimate goal of visiting them all. The prize, which he held a record number of times, was bragging rights at happy hour. On his map, the Must Visit fests were circled in red while the Nice to Visits were circled in blue. Each fest was also given a priority level of one through five.

“I’d better reassess my plans,” he complained after another half hour passed. He pulled out the map and began studying his fest-hopping route with all the seriousness of a four star general planning a sneak attack against a much better equipped enemy. “The Leusdorf fest will have to be downgraded to a four. It’s too far east. We couldn’t possibly swing back to Klingerbrick and still make Rheinfell. Goddamnit Newsome! It’s almost ten!”