On this first day of April (and my Uncle Bob’s birthday), here’s a rerun from a few years back:

In Shakespeare the fool often plays a pivotal role, generally during or after a tragedy when they remind us of the inevitability of human folly. My favorite fool is Mercutio from Romeo and Juliet.

“I talk of dreams which are the children of idle minds.”

To quote Shakespearean scholar John E. Hankins: Mercutio’s “unique blend of critical acumen, delicate fancy and obscene levity nearly stole the play from Romeo and Juliet and thus he must be killed off fairly early on.” Mercutio sees the trajectory of dreams in the cold light of day and decides to make merry of the dreamer although inside he weeps. He recognizes he can do nothing and that his words will make no sense to those who do not want to hear. Not unlike political satirists like Bill Maher or Jon Stewart.

Fool means “a silly or stupid person; a person who lacks judgment or sense.”  In the late 60s those of us who believed a world without hate and war was were often called fools. Which brings me to my second favorite fool, Paul McCartney:“The fool on the hill sees the sun going down and the eyes in his head see the world spinning round.” 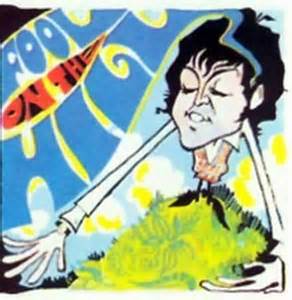 Okay, we were all wide-eyed fools when his song hit the airways. Then we got hit with mortgages, children, child support, Republicans, Libertarians, Rush Limbaugh, the Octomom, Reality TV, IRA rollovers, etc. But you know what? Forty some odd years later and the baby boomers are increasingly returning to the hill to watch the sun going round.  Being McCartney’s sort of fool can keep you young at heart forever and if there’s anyone who’s proof of that, it’s Paul McCartney.

And then we have the modern day fool, personified by Peter Sellers in Being There.  A genuine idiot whose  regurgitation of whatever he hears on television propels him to national prominence.  Golly, sound familiar?

I have a special message for him:  UB, Brad Pitt called me this morning pleading to play the part of Oncle Boob.

I see a certain resemblance between Uncle Bob and Brad Pitt, don’t you?

What do you say – yeah or nah?

Hurry up and give me your answer because Joel says George Clooney is on the other line!

12 thoughts on “My Favorite Fools”