This morning I awoke to the soft patter of rain. At first I listened in disbelief. The weathermen had been waffling for days about even the scantiest possibility, leaving us with visions of catastrophic water wars and Stranger in a Strange Land scenarios. If you’ve never read this sci-fi classic, the main character was raised on Mars where there is little water and thus, water is sacred and the wasting of water unthinkable.

But it was rain and, as the sky lightened, the joyous ruckus from the jays, chickadees, and spotted towhees as they gave thanks was a sound unlike I’d ever heard before.  There would be no fighting over the birdbath on this day! 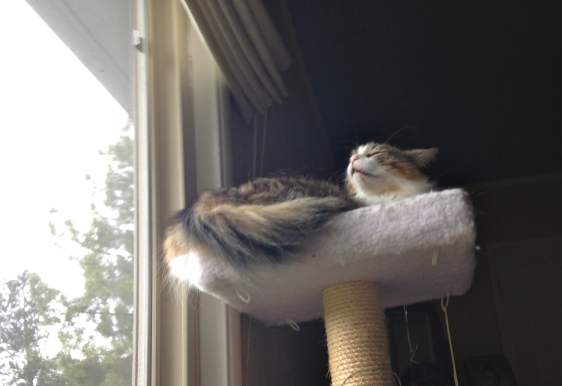 Kitty grooving on the heavenly aromas brought in by the wind!

It’s hard to imagine feeling happier! Photo by the amazing Christy A. Gudel

Rose reaching to kiss the sky.

Note to readers:  I will be up in Reno Nevada with limited access to the internet for who knows how long.  So apologies for not keeping up with your blog postings, etc. When I return, I’d get to know you a little bit better.  Let me know if you’d like to guest post!  Thanks, Jan