As promised, the end of Brownie Fright Night.

To recap the story thus far, twenty girl scout brownies and their chaperones (mothers) caravan in their mini-vans to an abandoned tubercular asylum for a stormy weekend retreat. After settling around a struggling fire and singing girl scout songs, one of the mothers begins a ghost story set in her native Norway but before she can finish, the lights flicker out.  The mothers decide it’s time to turn in.

Ruthie finally got more wine (once the girls settled down.) By that time, we all really needed a drink. The little darlings had chosen to bunk in the large room at the end of the sanitarium because it had enough cots that they could all be together. The problem was the room also had an exterior door and we had at least four flight risks. After much debate we agreed that one mother would bed down with the girls while the rest of us chickens slept next door.  Sylvana, of course, volunteered.  She just couldn’t get enough of “her girls.”

Once things were quiet, Cate, Marith, Ruthie and I slipped down to the kitchen where we drank wine from metal cups by candlelight. Outside, branches from nearby trees raked the side of the building but at least the rain had abated.

“Do you think the girls will get any sleep?”  Cate asked.

“You haven’t been on too many sleepovers, have you?”  Ruthie chuckled.

“Well then, maybe one of us should sleep in there with poor Sylvana.”

“She’s the heaviest sleeper I’ve even seen,” I assured them. “As soon as her head hits the pillow, she’s in Snore City.  At the girl scout jamboree she slept through the tent collapsing and all those girls screaming their bloody heads off.”

I thought it was funny but Marith didn’t smile.”It is not normal to have so much energy and then to drop into a sleep like that. Maybe that is why she goes to Dr. Paulson.”

“Yes, she sees him three times a week.  Gwen says she even shows up at their house!  Uninvited!”

We shook our heads no.

“He’s the shrink who testified at Meryl Ottoman’s trial.”

“You weren’t here then, Cate. Meryl Ottoman slashed her sister to death a few years ago – with a machete! She claimed her evil twin did it.”

I had to laugh.  The only reason I’d signed on to be a girl scout leader was because no one else would and Sylvana made it clear that if no one signed on to assist her, there would be no Brownie troop. “I had to get a TB test and that’s it.  I’m sure Sylvana’s just depressed.  I don’t think things are going well in her marriage.”

“She crashed my Christmas brunch last year dressed as a clown! She scared Winston half to death, poor little thing.  He peed all over the carpet.  Maybe we better get back there.” With that Ruthie corked the wine and put it into the cooler.  In the space of a few minutes Sylvana had gone from being the world’s best girl scout leader to a clown-faced axe murderer with an evil twin.

We returned to a scene of relative calm.  As I’d predicted Sylvana was dead to the world leaving the girls to entertain themselves with the flashlights they had been ordered to turn off.  A lantern in the hall provided just enough light should one of them need to visit the bathroom.

After confiscating the flashlights and responding to their complaints – two girls had upset tummies, one couldn’t find her sleep bear, one demanded to call her mother and the “usual suspects” wanted to take a midnight stroll to find banana slugs – we took to our bunks fully dressed, knowing we probably wouldn’t get much sleep.

The lantern in the hall provided just enough light to bring splotches of pealing paint on the ceiling to life. I kept thinking that only a few decades before the room in which we were trying to sleep housed patients in various stages of tuberculosis, some even dying. As I tossed and turned within the tight constraints of the sleeping bag, those splotches grew and shift-changed into the former residents of my bed singing their sad stories in my ears, or so I dreamt.

I woke to a grumble and then footsteps as Ruthie made her way down the hall. She has to go to the bathroom, I thought. Better her than me.  Walking the halls of the old sanitarium, with its creaky wooden floors, bleached beyond character, and yellowed walls at night with a flashlight, well, let’s just say, I’d really have to pee.

After a few minutes Ruthie returned.  “Jan – I thought I heard someone sobbing but I checked on the girls- they’re all okay.”

Cate snapped to a sitting position.  Followed by Marith.  They’d only been pretending to sleep or maybe like me, had been haunted by previous residents.

Ruthie lit another camp lantern.  “I’m not sitting here in the dark. I don’t care if we don’t have enough fuel…”

She was cut off by a low rumble.  Earthquake, I thought but nothing moved. Mudslide? Rivers of mud run under and destroy the foundations of many structures on the mossy side of Mt. Tam.  Was the sanitarium about to be washed away?

Then we heard the howl of a lone wolf.  Followed by another and another as their pack assembled somewhere not far away.

I tried my best to make light of our situation. “Well thank goodness we’re not in tents! The wolves probably just killed a deer and are inviting other wolves to… ”

“Shush!”  Ruthie ordered.  “Do you hear that?” We sat around the lantern listening to what sounded like a pack of wolves sniffing and scratching just outside the undraped windows.  “Go see what it is.”

Before any of us could move, there was a racket at the back door, shortly followed by the screaming of brownies.   A pack of wild dogs now snarled and tore at the flimsy door. The usual suspects viewed the whole event with great glee and somewhat perverse scientific interest while the others ran into our room. 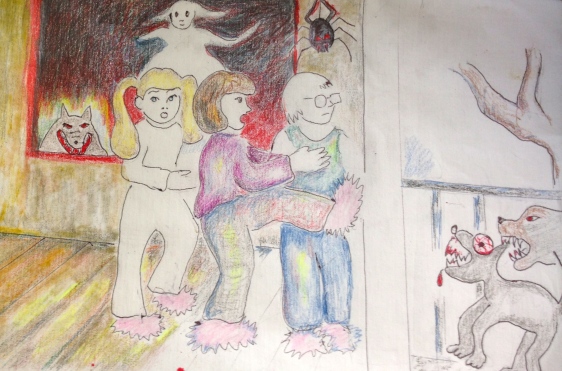 The “usual suspects” view our plight with delight!

“The kitchen!” Ruthie cried. I’m not really sure why it made sense but we gathered the girls and off we ran down the halls with hearts racing.  Once there I realized why it made sense.  The kitchen windows were small and far above the floor and the exterior door, for reasons I can’t fathom, was metal.  Quickly we did a head count – yup all twenty girls were present and accounted for.

“My god – she couldn’t have slept through all that!” Ruthie said. “Shouldn’t we…”

But there was no reason to worry about Sylvana.  A howl just outside the kitchen door, quickly followed by the scurrying of the rest of the pack informed us that the dogs had followed us to the kitchen.

“Don’t scream girls,” Marith pled, as they began to shriek. “This metal door is strong.  If you scream it gives the dogs what they want.  Let’s sing a song. I’m sure Mrs. C knows a good song.”

I had only one thing on my mind at that moment and it wasn’t a Brownie song. “Ah, ah..  let’s see.

“We should call for help,” Cate said.

“Who’s going to volunteer to fight their way through mad dogs to the phone booth?”

The usual suspects stepped forward, one of them pointing out that she had a yellow belt in karate as she kicked imaginary dogs with her fluffy pink slippers.

“If we sing the dogs will know we are not afraid and they will leave.” Marith explained.  “That is what we do Norway.”

“How about Make New Friends?” One of the girls suggested.

We survived that night by soothing mad dogs with girl scout songs but left in the daylight as soon as the coast was clear. Our first stop being the coffee shop.  Sylvana, who’d slept through the whole thing and awoke bright and perky, risked her life by suggesting we at least take one short walk in the nearby woods before leaving.

Thank you so much for reading!  If you want to read the whole story without breaks – click here.