Doesn’t look very summery, does it?  The sun had gotten itself snagged in a spider’s web of clouds above this tree and looking up I thought it might be too bright to get a decent picture. This scene reminded me of the work of one of my favorite painters, Georgia O’Keeffe. O’Keeffe is most famous for painting pictures of flowers which some art critics say represented vaginas, an intention she firmly denied. Or surrealistic desert scenes with cow skulls.  However she did do a few upside down paintings.

Yes, this the correct orientation for this painting.  One wonders if she painted it laying down.

She also liked to capture the glare and other worldly feeling of a city night. 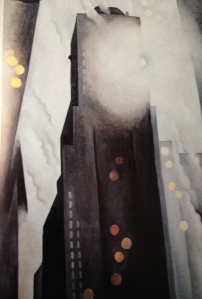 I used to imagine traveling to New Mexico to meet O’Keeffe who, by the time I discovered her, would have been eighty. I’m glad I didn’t.  Successful artists live for their art and all else is irrelevant.  In O’Keeffe’s case, she regularly scandalized the art world (not an easy feat), first by having an affair with an older married man, then by allowing him to take “erotic” pictures of her, and finally – many years later – taking a lover fifty years her junior. Her personality was described as “prickly” and it is said she couldn’t stand people who weren’t thin. It would have been like traveling a thousand miles to spend time with my grandmother who also didn’t like fat people and was as prickly as they come.

Ever fantasized about meeting someone famous and then realized it might not be such a good idea?