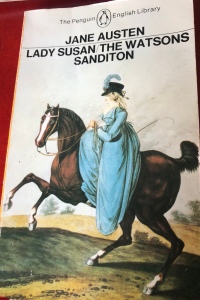 I was going to wait until Masterpiece Theater’s version of Sanditon (Jane Austen’s final novel) finally ended before completing my review (begun here) but they’re stretching out the plot like one of those Netflix shows that go on season after season until you realize you’ve been sucked into a damned soap opera. One that will go forever and ever, long after the original stars have died and been reborn and now fight twins who swap brains, obsessive orangutan nurses, and dolls that come to life.

Vampire actors are perfect for Soaps as they never die! They can go on and on and on. But Jane Austen heroines?

Jane Austen only finished eleven chapters of Sanditon before she died and so all of the characters and plot twists had to fleshed out by other authors, based on what she “laid out for them.” After eleven chapters, you can often guess where an author is headed.  But, by the end of the eleventh chapter of Pride and Prejudice (Austen’s most revered work)  we hadn’t even met Mr. Collins.

For those you who’ve never seen a production of Pride and Prejudice, of which there have been many, he’s the distant cousin who, by reason of an archaic system of patriarchy,  will eventually kick the heroine (Elizabeth Bennett), all of her sisters, and their widowed mother to the curb, leaving them homeless.  Unless, of course, they marry.  Marriage in Austen’s time was the only way for respectable women to leave their parents and take their place in society and what better way to illustrate that injustice than by creating Mr. Collins, a man in whom “the deficiency of nature had been little assisted by education or society …’’

Yup, in jolly ole England even a man who was a pompous nitwit was worth more than a sensible woman and you gotta bet Austen wasn’t too happy about that!  So how did the writers who took on the task of completing her last, unfinished novel deal with that anger?  Well, they neutered it. Charlotte Heyward isn’t looking for a husband nor does she seem too worried about a future without one.  Heh?

I had not read Sanditon in decades so I couldn’t really claim that  the screen writers were taking obscene liberties with her work. Luckily the story is only 66 pages long and so I reread it last night.  I won’t bore those of you who could give a figgy pudding about Sanditon or Austen or even Masterpeeve Theatre any further but, I wasn’t wrong.

Anyway, today’s Valentine’s Day and here in Northern California we’re seeing the first glimpse of green which to me is a romantic sight.