After you called I opened Dad’s tattered briefcase. I’m not sure what I expected.  Perhaps something as mundane as lecture notes that he never got around to throwing away or an old slide rule. I was right about the slide rule.  From the size and condition, it was probably a college graduation present. I had to chuckle at the belt hook on its leather sleeve because Dad was the only professor nerdy enough to hang a foot long slide rule from his belt and strut all over campus. 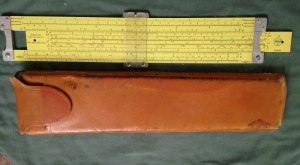 Another mystery of the tattered briefcase was a pair of beaded moccasins which fit me just fine. I paddled around the house wondering who had worn them before me – an Indian chief or his squaw?  They were in too fine a condition to have been worn everyday and certainly too fancy to wear while scalping blue-eyed devils. I googled their worth and quickly removed them from my smelly feet and put them on the shelf. 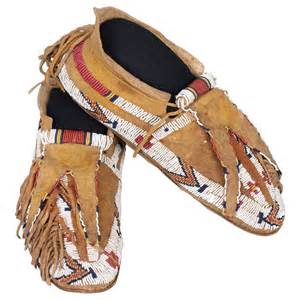 The moccasins sat on a third mystery.  Copies of a law suit filed in 1982. Isn’t it funny what people decide to hang onto?  I’m guiltier than most of hoarding things that will mean nothing to my children. My guess is they’ll just say:  “Bring on the dumpsters.”

But these papers meant something to Dad otherwise why would he have held onto them so long?  You know me; I had to know why and so I read through them.

The law suit pertained to the estate of Mary Ness who died in Fargo North Dakota in 1981. She died intestate which meant she had no will.  You’re probably wondering who she was. I have to admit, I didn’t put two and two together right away either but – remember those five dollar checks that came faithfully on birthdays and Christmas from an aunt we never met but to whom we had to write thank you notes. Well, that was Mary Ness, Dad’s aunt.  And who filed the suit?  Dad’s sister and our cousins.

When you die intestate, the state decides who inherits your property but before they do, they have to conduct a search for all of your living relatives. In her case the state discovered that from the age of fourteen Mary Ness hid what she must have considered a shameful past.  When she met Elmer, our GrandMother’s brother, she claimed to be an orphan with no living relatives.  Elmer, badly wounded in WWI, suffered for twenty years until alcoholism did him in, leaving Mary in the talons of that beacon of virtue and propriety GrandMother Myrtle. You remember how kind-hearted and non-judgmental GrandMother was, don’t you?  Ha! Even her own mother was scared shitless of her.

Mary never remarried and never had kids.  She lived her entire life in North Dakota where she worked as a clerk. And when she grew old and infirm, our aunt took care of her with the assurance that she would inherit her estate of approximately $250,000, mostly held in bonds.

Only picture I could find of a young Mary Ness.

You’ve probably guessed the outcome of the state’s search.  Mary Ness lied.  She was not an orphan. She was an outcast. The search for heirs revealed she had a living brother and sister, two nephews and a niece, all of whom – except for one of the nephews – lived in small farming towns in North Dakota and Minnesota. When Mary Ness’ “family” found out money was involved,  they promptly came forward. One of the “nephews” even produced a birth certificate proving that Mary was his mother and not her sister, Gerta, who raised him.

The nephew’s birth certificate (dated Feb 17, 1914) states that his father was Vernon Scott, 27, a farmer and Gerta’s husband. His mother was listed as Mary Ness, 22, a housewife born in North Dakota.  However, lawyers for the state quickly discovered that Mary Ness was born in Sweden in 1899 which would have made her 14 when the boy was born; not 22.

As to what happened, who knows.  Did Mary Ness seduce her sister’s husband?  Was she raped?  The only thing we know is that after the birth, she was shuttled off to the city to try to make it on her own, where she met Elmer, himself a broken man.  Did he know her history?  If he did, it died with him.

Dad’s sister quickly latched upon all of these inconsistencies and contested the state’s decision. She went so far as to claim she was ‘betrayed’ by Mary because she and Dad were led to believe they were her only heirs.  Oh, how Dad hated to be part of that ugly mess. One of the documents is a notarized statement from him that he wanted nothing to do with any of any proceeds gained as a part of the suit. Sadly the bulk of the inheritance went to a family that turned their back on a fourteen year old girl.

They’re all dead now.  The aunts, the cousins and all who came before them. Their secrets in briefcases, saved by someone who didn’t want to remember, inherited by someone with an inconvenient imagination.