It was almost noon by the time we finally reached the Spanish border somewhere high in the Pyrenees Mountains.  The air was thin and dry.  We were sweaty, hungry, and crabby, especially after noting that every car not displaying a Spanish license plate was being pulled over and the occupants questioned by men in skin-tight military uniforms standing upright and proud in the sweltering heat.

“Oh my God,” I whispered to Carolyn, “they really are paranoid.  But cute.”

She glared at me. “Just don’t say anything,” she hissed.  We were in a car with DAC license plates which, in Cold War Europe, was akin to driving around with a nuclear bomb on your back seat. The Department of Army Civilians, you see, was a front for the CIA or so many Europeans believed.   This belief was so wide-spread in Germany that the local politzei had invented a game called “harass the occupiers,” in which they would pull over people with DAC license plates for flimsy reasons and confiscate their licenses.  They caught my Uncle Bob several times (okay, in his case considerable alcohol was involved) which is why he didn’t need his car! He couldn’t drive it.

Anyway, back to my story.  As soon as our car was identified as belonging to the vile CIA, extra guards were called and Carolyn and I ordered away from the vehicle. 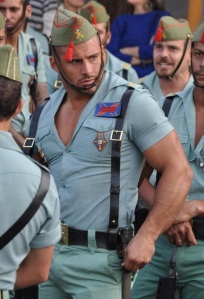 Spanish Military Officer – you may look but do not flirt!

“Do you have any drugs?”  One of the guards asked me.  His  brown eyes burnt through my sleep-deprived body like a lightening rod.

Next thing I knew Senor Passionate Eyes and his buddies were ripping out the seats of the VW, dumping all of our stuff on the ground and searching through it.

“It was a joke!”  I cried, as they pulled Carolyn’s sexy little undies from her suitcase and stuffed them into a bag (evidence?).

“Shut up,”  Carolyn scowled.  Men were pawing her underwear because I’d been stupid enough to flirt with a humorless hunk.

Hans and Klaus, who’d managed through the checkpoint with ease, waited for us and when the Spanish Inquisition was finally over, helped put the car back together. Hans even managed to convince the guards to return Carolyn’s undies which he gallantly handed to her one by one as she blushed. Then we followed them to the campingplatz. 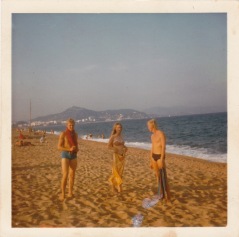 Klaus, Jan and Hans on the beach in Blanes Spain

The campingplatz was indeed full of Germans of all ages, shapes and sizes, all of whom had arrived with the intention of wearing as few clothes as possible.  I can still remember the nightly parade of naked fraus on their way to the communal, out-in-the-open showers. Not a modest lady in the crowd.  Carolyn and I showered in our bathing suits.  Typical American prudes!

By the time we assembled Hans’ thankfully roomy tent, the sun had set and the temperatures cooled considerably.  The sound of a band playing nearby led us to an outdoor cafe where we ordered pitchers of sangria and paella and giggled as the singer massacred the English lyrics to the song Sugar, Sugar, sung by the regrettably forgettable band – The Archies. 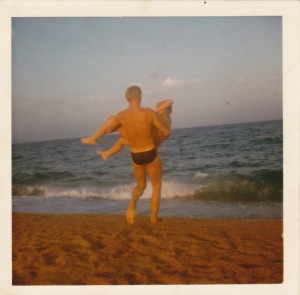 “Stop you rascal!” Hans gets frisky.

The first night went well.  We were all exhausted so a couple of pitchers of sangria knocked us on our butts.  However, the next night  I awoke to:  “Stop, you rascal!”  Hans’ hands had  found their way over to Carolyn’s body.  In the morning he asked me what “rascal” meant and I told him it meant we must be going…

Next – Mont St. Michel and the Samwitch Stand.