Sorting through old pictures and documents has left me in a funk, primarily because they detail lives I know were hard, where victories were probably few and disappointments many.  However, given the fact that over half my ancestors came to this country in the late 1800s, a time when travel was arduous and a future uncertain, I have to conclude that conditions in the countries they left – Ireland, Norway and Sweden – were much worse.

The Irish diaspora has been widely analyzed.  As anyone who’s read Angela’s Ashes knows: “Worse than the ordinary miserable childhood is the miserable Irish childhood, and worse yet is the miserable Irish Catholic childhood.” So no mystery there.  However, over one million people migrated from Norway between 1880 and 1920, which represented almost a ninth of their population. Can you imagine?  One in every nine people suddenly disappearing?  And to where?  Some barely settled land across an endless sea.

The number of Swedes fleeing the motherland was far higher, however they had more folks to piss off and so Norway wins the distinction for the biggest brain drain of the north. There’s only one explanation officially given as to why Nordics fled the land of cod liver oil in hordes: crop failure.  Really?  In a land of long dark winters and never-ending summer days, what crop could have survived in the 1800s?  Other than cod, that is.

I suspect there were other reasons such as lack of opportunity,  however you’d think those poor souls who left behind beloved grandmas, mothers and cousins would yearn to return to the warm hearth of youth for at least a visit, wouldn’t you?

Well my ancestors never did.  Once in the US, they turned their backs on the old world including its customs and languages.  As a result I never heard tales of the old country nor did I hear mother tongues being spoken. And so, I did what any ordinary child would:  I made up stories.

Just a couple of wild and crazy reindeer herders from Lapland!

These two love birds supposedly stole away on a merchant ship from Stockholm in the 1880s.  Because they had the same last name my mother theorized they were cousins who fell in love and had to run away in order to get married.  I went a little further and decided they were brother and sister.  (I’d been reading far too many Swedish novels and plays at the time.)

Someone who knew the real story wrote a letter to my grandmother in the 1930s.  Sadly the letter is in an obscure Swedish dialect that no one can translate.  This has lead me to conclude my great grandparents were not Swedish at all but incestuous reindeer herders from Lapland.

My great grandfather on the other side was from Vang Norway but the only way I found out anything about him was through a google search. 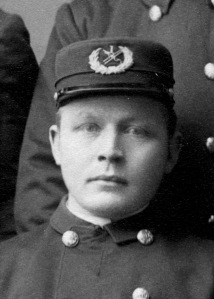 Ran off with a Sioux Warrior Princess?

He had the misfortune to die just after my grandmother’s birth and, after his widow married The Judge (by all accounts a man sans any sense of humor or love for children), Gilbert Flaten’s memory was left to wither on the vine.  When I asked my father what happened to his real grandpa I got this answer, “he just died.”  No matter how much I nagged him, I got the same response, “he just died.” When I asked what he did for a living all I got was “he was a photographer.”

And so naturally I assumed that while photographing prairie life around his home (Fargo North Dakota), young Gil fell madly and passionately in love with a Sioux warrior princess and, unable to resist the temptation to ride the plains on horseback chronicling the lives of the noble Sioux, he soon abandoned the restraints of Victorian life.

My version of his story seems logical, doesn’t it?

Well, that’s not exactly what happened. After my father’s sudden death, I sat down at the computer and out of nowhere got the urge to google Gilbert Flaten.  Here’s what I found out. 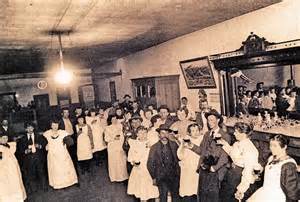 The real reason they  never spoke of him is that he ran a saloon during prohibition.  Horrors!

But he also ran a successful portrait studio and worked for the volunteer fire department before his premature death at 40 from some ungodly flu.

Okay – now that I’ve got ancestors on both sides rolling in their graves, I’ll sign off with a salute to all those wonderful folks who left family and homelands to travel to this crazy country!  Happy Fourth everyone!