My paternal grandmother believed that at some point in the near future the world would be bereft of spoons.  To prepare her grandchildren for the coming apocalypse, we all received spoons for Christmas, that is until Cousin George, then over six foot eight, pooped on her prophesy. I believe his exact words were “Get your head out of the vodka bottle Grandmother.”

“Oh what a wonderful spoon, Grandmother! Now I’m prepared for the Spoon Apocalypse.

Through all my travels and relocations, my spoon collection has not fared well but I still have the first one she ever sent me. It’s a sterling silver teaspoon with an etching of the Moorhead Minnesota Public Library.  I always assumed it was just something she picked up at some antique store, but through the miracle of the internet, I believe it had some other meaning to her besides the spoon prophesy.

Moorhead was my Grandmother’s home until her father died and her mother married The Judge. Probably a wise thing for a young widow with two small children to do but The Judge was a controlling nasty pants who didn’t allow his stepchildren to talk of their father or paternal aunts, uncles and cousins still living in Moorhead. That town always remained a life that could have been if not for the Spanish flu.  As a freshman in college when the library opened, she probably also spent a lot of time there.  At that time, the University of North Dakota at Fargo catered to the study of animal husbandry and improvement of soy bean crops and not to the study of something so useless as English literature.  So the spoon wasn’t just something she wrapped in foil and sent to her granddaughter (or maybe it was and I’m just a fruitcake) 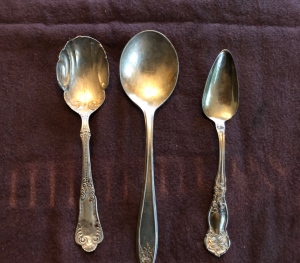 After Grandmother’s death my aunt sent me this odd assortment of her utensils. Note anything odd?

There’s only one fork and who needs that many butter knives? Or pickle forks. 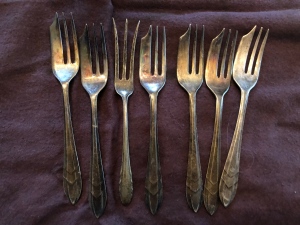 I don’t know what to do with all those spoons. Perhaps play Spoons.  Have you ever heard of that game?  Apparently it’s also known as Pig and Tongue and it is some kind of variation of Musical Chairs.  The winners of Spoons take a spoon from the middle of the table and the winners of Pig, fart.  (Not really they just touch the end of their noses. Don’t ask.) The winners of Tongue stick their tongues out.  I imagine it’s a game old Judge Nasty Pants would have loved.

Maybe I’ll give the spoons to the Spoon Lady!  Any odd things you’ve gotten as Christmas presents that made sense many years later?

29 thoughts on “The Spoon Apocalypse”