When I was in my early teens, boy, oh boy, did I love spooky graveyards! Mesmerized I’d read gravestone inscriptions and wonder about the dead.  Of course, I was not alone.  For her sixteenth birthday my step-daughter wanted nothing better than to take a gang of her fellow goths to a graveyard at midnight to hustle up some ghosts, vampires or zombies. Unfortunately all that happened was they got lots of bugs stuck in their spiky hairdos – ick!

Goth Sweet Sixteen  Party in the cemetery. Where else?

I gradually outgrew my fascination with the dead but a frightening childhood memory continues to haunt author and graveyard aficionado Jennifer Hotes to this day.  In her words, here’s what happened.

“It began with the best intentions, a single mother searching for a babysitter so she could attend night school, however it resulted in a lifelong obsession with cemeteries.

I was a petulant child, my older brother, Garth, was the good one. I had a wild imagination and frequently woke up from nightmares screaming loud enough to wake the entire household. No relative would share a bed with me when we came for a visit. They called me Rosemary’s baby. They joked about exorcisms.

“No one wants to sleep with me except Satan.”

But, Mom didn’t take this into account when she decided to beef up her teaching credentials. Desperate for someone to babysit Garth and me, she finally found someone, the daughter of a cemetery caretaker. After feeding us supper, she dropped us at a little house in the middle of a graveyard and into the care of a woman with a friendly face and dishwater-blonde hair. Clad in overalls, the woman urged us to trek outside and play. She assured us that she and her siblings grew up in this cemetery. Their favorite games had been hide-and-seek and tag.  We did the same thing in our apartment playground, right? 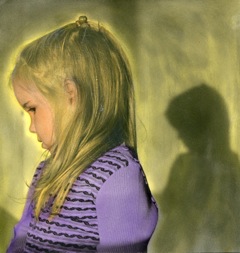 Go out in the graveyard to play, little girl…The ghosts won’t hurt you!

With a gentle nudge, she pushed us off the front porch onto the cemetery grounds. I remember how sinister the headstones looked in the dark, shaped like smoky ghosts anxious to play, anxious to scare the shit out of a couple of kids. Maybe we attempted to play, but the black space in my memory leads me to believe we probably crouched behind the house, shivered and piddled in our pants, as we counted down the minutes until she allowed us back inside the safe, cozy house. Once  inside, I remember falling asleep on the couch, eyes glued to the picture window hoping for the flash of my mother’s headlights. We were silent on the drive home.  What Mom mistook for natural end-of-day sleepiness, was actually the result of living in fear for hours. Terror wore us out.

The effect of that cemetery never left me. It whispered to me in my nightmares, it colored my imagination in reds and grays. Like coming upon a grisly accident, I found I couldn’t look away from a cemetery, and, in fact, was drawn to them. Maybe it was a lame quest to conquer a phobia, but I became obsessed with finding cemeteries and walking through them. One night I had a nightmare which would eventually become my first novel, Four Rubbings. The dream flickered to life like a movie, four teens visit an old Seattle cemetery to create tombstone rubbings on Halloween night. They hope to make a connection with the people buried beneath the tombstones. They get more than they expect, when the four graves lead them to uncover mysteries, mysteries that need to be unraveled to bring peace to the dead.

The author’s trusty hound, Cooper. He knows where all the bones are buried.

I knew that the four graves my characters rubbed needed to be based in reality, so I researched, traveled and visited forty plus graveyards across the west coast. My daughters spent two summer vacations exploring cemeteries with me. Yes, there will be therapy bills, but in the meantime, they’ve learned to appreciate the beauty and serenity of these places. They’ve become curious about the people buried within the graves, and wondered about their stories, just like me. We found the graves that the teens rub in Four Rubbings, and so much more. Even now, as we travel, our journeys always lead us to new boneyards, new discoveries and fresh questions.

For us, Memorial Day is something we celebrate everyday, taking time to remember those that have come before us, lived, tried their best and passed away. They were important. And as long as we take the time to touch their tombstones and speak their names, they continue to live. And that is a good thing.”

On sale on Amazon