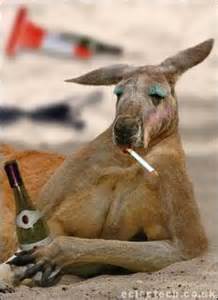 My husband just told me we have a “large” animal living in the cellar beneath our house.

Him: “Well, it wasn’t afraid of me. It just kind of waddled away swishing its fluffy tail in my direction.” 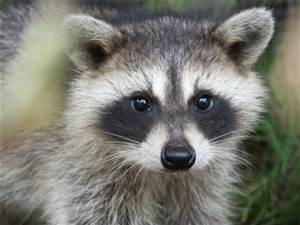 “Do you think it was a raccoon?” I ask hopefully.

The only other animal small enough to get into the cellar is, yes, you’ve guessed it – a SKUNK. Double, triple yikes. (Faithful readers will remember the unrelenting Skunk Siege of December 2014.)

He seems to read my mind: “Maybe that’s why our house smelt so bad for so

long – a skunk confronted our raccoon.”

Now it’s our raccoon. I must nip this idea in the bud, immediately.  Hubby has already adopted several squirrels and chickadees.  “It’s not our raccoon!”

He has another idea.  A few weeks back he left the door to the cellar ajar and of course Pretty Kitty with his little furry paws managed to pry it open and romp around in the dark, dank and dirt of the storage area.  Of course we didn’t realize it until three in the morning when we heard a piteous yowl and practically fell out of bed.  “What the hell was that?”  We both asked in unison. The resulting search of the house failed to locate Kitty and, after coming to the conclusion that he was hiding in some deep crevice and would come out when he was ready, back to bed we stumbled to try to get some rest.  In the morning Kitty still could not be found, until around noon when I looked out the back door and there he was. 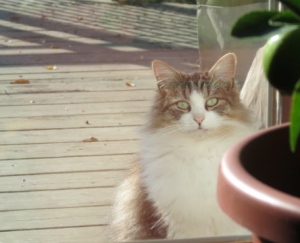 Snubbing his nose at us as if to say, “Aren’t I a clever cat”?

Hubby’s new idea is that the cat ran into the raccoon. “Maybe that’s how he got outside.”

“Wait a minute.  If it’s been under the house for so long then what’s it been living off?”

“Hum. I haven’t caught any rats in a while.”

Great!  Apparently while I sleep there’s a party going on beneath me. Cats, rats, raccoons and skunks.  Did I mention that we keep our wine in the cellar?

If he can wrestle crocodiles, I reckon he can take on a raccoon!

Never fear.  We’ve called in Crocodile Dundee to track the wild beast down. Who knows?  Maybe it’s a drunken kangaroo and he’ll know just what to do.

I’ll let you know how that goes.