On the third day of chili grinding (see Making Mole Sauce and Making Mole in the Modern World) the chili-nut-fruit mixture was still not ground to Liz’s satisfaction and so I kidnapped every grinding machine I could find in Joel’s well equipped kitchen and brought them to her house. 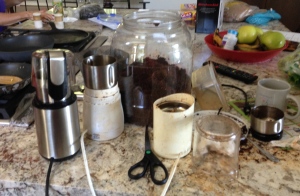 Then we got an assembly line going – using one grinder until it started to overheat and then switching to another.  BTW – the best grinder in our assortment was the small white one on the right (a Grup).  I’m happy to say that no grinders were permanently damaged.  Finally we had a Costco-size pretzel jar full of perfectly ground mole powder! 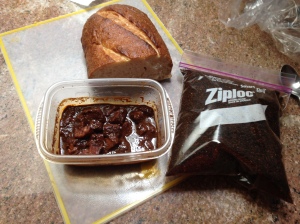 Above is pork mole with sourdough bread and my share of the mole powder. It should last a year.

Liz then added a cup of the mole powder to 8 ounces of tomato sauce and sauteed the mixture with a cup of chicken broth and grated chocolate to taste. Please note, if you use dark, dark chocolate you may want to add sugar to prevent bitterness which we did.

The mole was divine.  Worth every blister! 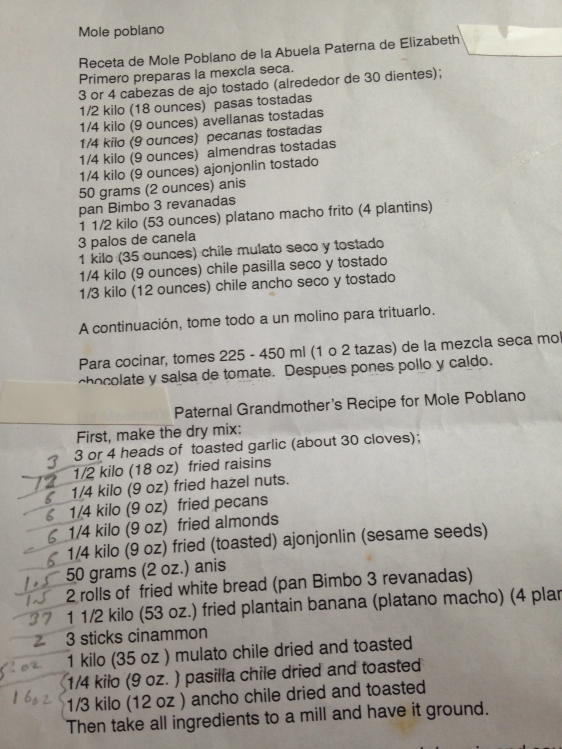 Liz’s Paternal Grandmother’s recipe – Note the final step – “Then take all ingredients to a mill and have it ground!” No shit!!!!!!!!

Last night I made chicken mole with the commercially made powder for a taste test.  Aside from being a little sweeter than the homemade, it was also excellent.

When Liz enrolled her son for kindergarten she told the principal that he was bilingual, that English was his second language. The woman countered by saying she didn’t think it would be too much of a “problem.” A problem, Liz thought, seething.   Of course, it wasn’t a problem a few months later when the son of a Venezuelan ambassador interviewed at the school and they needed a translator.

Stereotyping by political buffoons  “Mexicans are all rapists” may seem like merely the ranting of an opportunist but unfortunately it’s far more pervasive in our society than we blush-faced Euro-types want to admit.  And don’t get me started on racism.

And while I’m at it, next time:  My Pakistani Nanny.