In honor of those people in New Zealand who lost their lives due to prejudice and ignorance, here’s a repost from a few years back. Before you blindly hate or fear people who may have different beliefs and a different life style, get to know them.

I dropped out of college when the chance to live in Europe came along and didn’t have a chance to return until the mid-eighties when my life hit an unfamiliar period of calm and, because I wasn’t used to calm, I decided to spice life up by returning to UC Berkeley. However I needed childcare as my son was just a toddler. Finding childcare is always a sticky-wicket if you don’t have a mother-figure nearby to help.

After fretting over my options for a couple of weeks (potential child abusers versus soulless baby mills), my husband pointed out that we had an extra bedroom with an attached bath, so why not find a college girl willing to trade room and board for help with the children?

He envisioned a buxom blonde from Sweden. I thought more along the lines of a quiet farm girl from Kansas.

The ad read: “Room and Board in exchange for child care a couple of times a week. House is only 15 minutes from campus.”

I’d just returned home from posting the advertisement when the phone rang. On the other end of the line was a young man with a thick accent. “I have sixteen brothers and sisters,” he informed me. “I know all about babies.”

Stunned stupid I mumbled:  “But you’re a man.” Something which he’d probably already figured out.

What a corner I’d painted myself into! I couldn’t say we want a girl, now could I?  That would be sexist. Besides, he had a point. There was no “must have a vagina” in my ad.

“I can come in for an interview today.”

“Today?  Ah, no, um –  that won’t work. Tomorrow, eleven o’clock,”  I needed time to figure out how I was going to reject him. Now, I should have said the position was already taken but I’ve never been that quick on my feet.

The next morning at precisely eleven the doorbell rang. How stupid, I thought. I’ve probably just invited a serial killer or a rapist to my house while my husband was at work. I should have arranged to meet him somewhere else, a public place with lots of people around.  I should have had him come when my husband was home. But as I said, I’ve never been quick on my feet.

Like a ninny I peered out the living room blinds.  At my front door stood a young Omar Sharif in a plaid shirt and slacks, his dark hair cut short. Figuring that serial rapists generally don’t look like Omar Sharif, I opened the door and let him in.

“Azizulah, that’s not such a hard name to pronounce.” You twit, I thought, feeling insulted. I’d traveled the world. I wasn’t a typical American, or so I thought.

He went on to say he was a graduate student from Karachi who had scored fourth in Pakistan’s version of the SATs which guaranteed him entrance into just about any college in the world (lack of confidence was not one of his failings). He took a look at the room and the bath and declared it would suit him just fine as it was far away from the “family” quarters and he liked to touch base with his family in the middle of the night. He also informed me that he expected to be allowed to cook at least one meal a week and asked if the local butcher stocked freshly slaughtered goat. 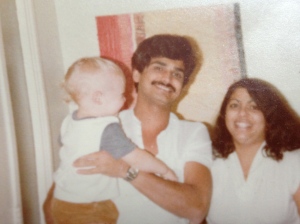 I was about to tell him that we’d get back to him when my son who was sitting on the floor abusing the dog began to wail. Aziz picked him up, made a funny clacking sound with his tongue and Cam settled right down. They got along so well that I invited him back to meet my husband for dinner that evening.

“Is there anything you don’t eat, other than pork?”

“Peanut butter!”  He said, looking as if he’d just smelt a fart.

He stayed with us until he married the woman he claimed he “would die without.”  It was true. Whenever she was out of town he couldn’t eat or sleep, often stumbling from his room red-eyed and moaning.  I’ve never seen a man so love-sick. 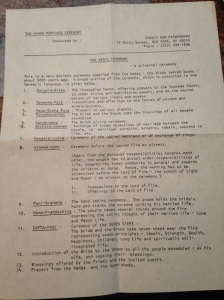 Unfortunately, she was a Hindu. And so, of course, his family boycotted their wedding and my children played the roles meant for the groom’s siblings. After a few years and children, fortunately his family softened their stance.

Here are just a few of the things I learned during my years with Aziz:

We introduced Aziz to Thanksgiving turkey, Christmas cookies, and Easter bunnies. He introduced us to curry, Eid and Ramadan. One summer, part of his large family came for a visit, staying at the Claremont Hotel and traveling around the Bay Area in a

convoy of vans. They owned a factory on the outskirts of Karachi and made replicas of the kind of furniture you’d find at Versailles which they sold primarily in Europe. They invited me to their home but, after Aziz told me the honored guest is always offered (and expected to eat) the eyeball of a freshly slaughtered cow, I declined the invitation!

I used to joke that during the time we were all together, we had the bases covered – the son of a Holocaust survivor, a baptized Christian (drifting towards Buddhism), a Hindu and a Muslim – should the world come to a sudden end; an end which would probably have been caused by one or all of the above religions.  Ironic, isn’t it?

44 thoughts on “The Devil’s in the Peanut Butter”