In the sixties cult classic, The King of Hearts, a Scottish soldier played by the late Alan Bates is dispatched by his commander to a small French village to diffuse bombs left behind by Nazis.  Once there, he tries to convince the townspeople of their imminent peril but they could give a rat’s ass.  Instead they insist on dressing in costumes and holding a carnival in the streets.

At some point he realizes that he’s actually dealing with the patients of the local insane asylum. The other villagers fled to safety before his arrival, leaving the crazies behind.

Last Friday, aside from the usual “Trump fumes in tweet threat,” this was the headline in our local paper that first caught my eye: “Legally Bombed.”  It referred to the annual 4/20 Fest happening in Golden Gate Park.  This festival has been going on for years but this was the first time it was officially legal.  Yes, finally Gram and Gramps can smoke their weed in peace and we don’t have to worry about posting bail. 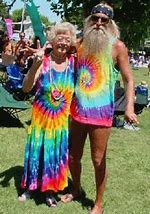 Then my eyes fell on this gem: “S.F. toilet monitor becomes a hero.” In San Francisco, public toilets or “pit stops” are so notorious for drug overdoses that they must be monitored by an actual human being.  So if you’re in SF and decide to use a pit stop, be aware that someone is counting how long it takes you to pee. I’m not sure what the accepted norm is, but don’t dawdle. Despite my snarkiness, this was actually a sweet story about an ex-con who saved the lives of two alleged junkies and was honored by the city.  No ticker tape parade but a commendation and a new uniform.

The next scratch-your-head-till-it-bleeds headline came from the great state of Alabama where they just executed an 83 year old man for the mail-bomb slaying of a federal judge back in 1989.  If they’d had him in prison for so long, why wait until he’s got one foot in the grave anyway? It just doesn’t make any sense to me. The last sentence of the article was the kicker:  He did not respond when an official asked if he had any last words.  Indeed. 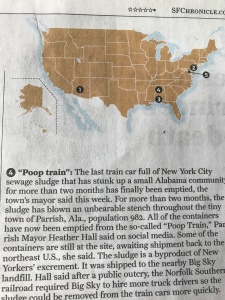 But, boys and girls, I’ve saved the most bizarre news item for last. In addition to executing 83 year olds, Alabama is the final resting place for New York City’s poop. The residents of tiny Parrish found this out the hard way when one of the “poop trains” used to transport the shit sat on tracks outside their town for two months.Ten million pounds of poop left sitting in Alabama’s humid climate. It must have smelt heavenly. There is a plus to poop, of course. Shit processing provides jobs which the state desperately needs. But, who did the residents of Parrish blame the stench on? Lax environmental laws? The fact that their officials had no plan to transport the shit from the trains to the landfill?  No. You got it. The elite liberals of New York.  I can’t wait till Trump finds out.  What do you think he’ll tweet?

It’s time to find that insane asylum, folks, and beg for admittance.  By the way, Happy Earth Day. May you never find a poop train in your backyard.

27 thoughts on “Legally Bombed on the Poop Train”