After spending two hours at a tax accountant’s with a 90 year old who can barely remember her first husband’s name I’ve decide my next Fi Butters’ mystery will be Murder by Cat, the strange tale of Ubiquitous K of Babylon Heights. 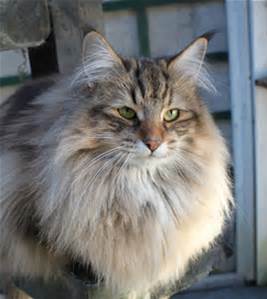 Synopsis: A series of murders takes place at Babylon Heights, a retirement village where all the residents and in particular the owners have skeletons in their Depends. Reluctantly former psychiatrist Fi Butters is called on scene when one of the residents, her elderly aunt, convinces the others that Ubiquitous K (a Norwegian Forest cat whose owner has recently died) is the cold-blooded murderer.

Murder by Cat, the strange tale of Ubiquitous K of Babylon Heights

“One thing I’m certain of, she was not killed by a cat!”

Martha was one of those little old ladies who questioned everything she heard and thus it was impossible to get through a conversation without saying the same thing at least three times and she wasn’t alone.

“Well isn’t that the darndest thing.  Killed by a hat.”  Mr. Fassenbinder chimed it.  He’d long since lost his hair and hearing but refused to wear an aide because “there wasn’t much good to hear in the world, so why wear the damned thing?”  I had to agree.

The residents of Babylon Heights had assembled in the very same community room where holiday parties and bingo games were held. I figured there had to be at least forty folks which was fine; the room could easily hold a couple hundred.  Heavy furniture provided comfy seating which meant a few in my audience would probably doze off, but regardless, after my auntie introduced me I launched into an attempt to quell the panic that rattled their aging bones.

“Nobody was killed by a hat or a cat or even a bat!”  I chuckled which clued them in that something funny had been said.   A few followed suit with a chuckle that sounded painfully forced. Okay, Butters, I thought,  the last comedian to crack these folks up was probably Bob Hope.   “First of all, despite my aunt’s kind introduction, I am not a detective.  I am, or was, a psychiatrist.”

“Yes Martha. Was.  But I won’t bore you with the gory details of my many career changes…”

Okay, that’s as far as I’ve gotten on this bit of silliness.  If I’m going to continue I need some appropriate character names. Do you have any suggestions? (other than – stop now Jan before you embarrass yourself any further!)

When I first started blogging a couple of years ago, I vowed to stay away from three subjects: religion, politics and cats.  So far I’ve stayed away from two of them. 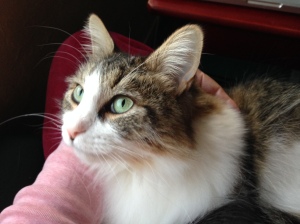 Guess which promise I broke first?

Yup, you got it.  Cats! Pretty Kitty claims I vowed not to write about all animals and that I broke my vow with one of my very first posts. 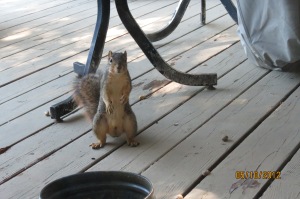 Well, I am about to break another.  I shouldn’t but after those two Republican debates I can’t help myself.  American people what are you thinking?  Those debates were broadcast all over the world and probably into outer space where this very afternoon the Federation of Planets is having their own debate: whether or not to  send Captain Kirk back from the future. 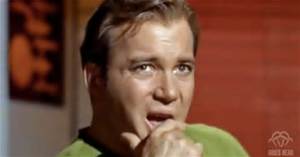 “In order to save Planet Earth you expect me to go back to 2015 and beam aboard a stage full of politicians? What if they infect the Enterprise and take us back to the Middle Ages?”

And the feedback from the “man/woman/idiot” on the street was even more mind-numbing. For example, Megyn Kelly interviewed a woman on The Kelly Show who basically said: “I like Carly Fiorina because she’s a bulldog!  She’ll take on Hilary Clinton and she’ll win!” 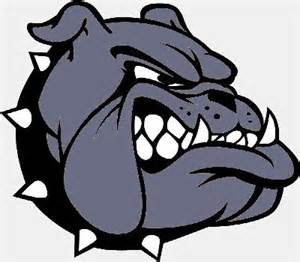 President Bulldog, er, Fiorina – are you ready for your breakfast of liberal over-easy?

Really?  This isn’t a dog fight, lady, even though you might want it to be.

To the many people who say: “I support Donald Trump because he’s not afraid to speak his mind.”

I say, yes, and that’s the scary part.  Do you really want him to call someone like Andrea Merkel a fat, stupid cow for negotiating with Russia which you know he’ll do because he doesn’t hold anything back, remember? 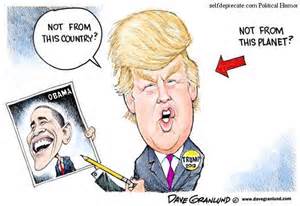 Images are from BIng.com 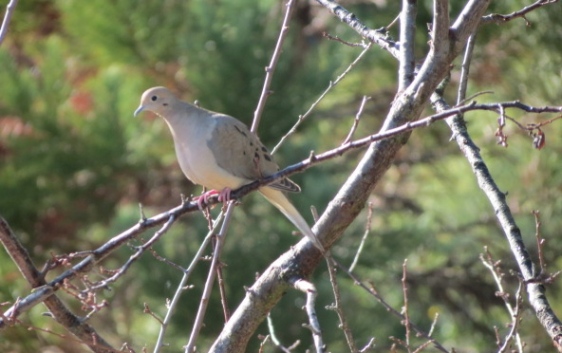 I found this guy lying on the concrete patio near where I’d chased away a grey cat who likes to tease our indoor cat. At first I thought he was a goner but as I drew closer he started flopping about in a vain attempt to fly. His wing looked crooked and he couldn’t stand. His pinprick eyes pleaded with me – don’t leave me here, easy pickings for whatever predator might happen by. So I ran inside, found a shoe box, laid a piece of soft linen in the bottom and rousted Joel from his sudoku. He’s the animal person. Oh, I love animals but I don’t know how to handle them like he does. He gulped, donned his garden gloves and then followed me out to where the dove still awaited a painful ending. Luckily I knew – from years of field trip carpooling – about the wild animal hospital near us and so, after a quick phone call, off we went. 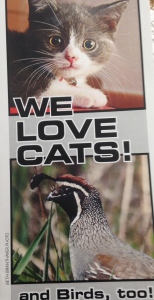 At the hospital a soft-hearted volunteer took our dear friend into the examination room and asked us to sign in. The walls of the lobby were filled with stories about other wild animals who’d been brought in and rehabilitated, giving us hope, although it was hard to imagine a bird with a cast on his wing.  When she returned I asked why we’d been asked to sign in and she explained that “our” bird had been given the number next to our name so if we called in they could tell us how he was doing.  She also said his hopes were slim. We haven’t called in.

Did you know that mourning doves are monogamous? Not only that but legend has it that once a mourning dove’s mate dies, he will not take another.  Kind of hard to believe, isn’t it?   Well, here’s my story:

Many, many years ago – so many that I’ve lost track – we decided to built a teahouse on a lower meadow where only weeds grew.  It took a long, long time because we were working full time, raising children, and trying to see some of the world while we were still relatively young and so it was a weekend only project further winnowed by family visits and the like.

It was also a family affair; my father architected the elaborate roof, my teenage son buffed up during the summer months by hauling blocks and concrete down the hill for the foundation, and hubby, of course, acted as financier and project coordinator. They would work together all day often squabbling over the how-tos and then after supper fall asleep on the old blue couch (which even then had seen better days) while watching British mysteries and drinking red wine. 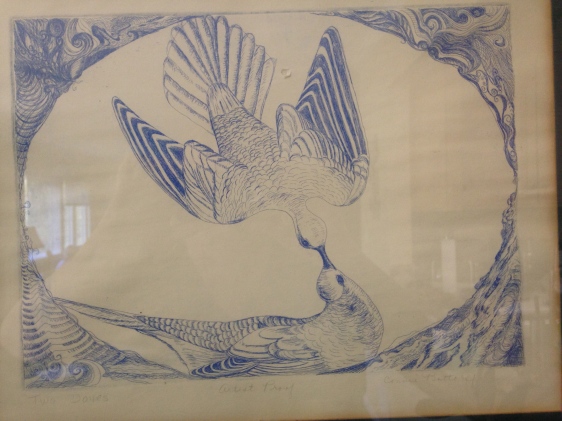 One evening Joel decided to finish off a few things down at the teahouse.  He didn’t notice that Mr. and Mrs. Dove, a lovely couple who’d visited us routinely in the past, had followed him down, probably because they knew he generally carried bird seed and peanuts in his pocket. 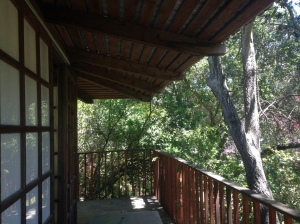 With a screech that set his hair on end a hawk, talons drawn, buzzed  past him and grabbed Mrs. Dove by her long slender neck.  She didn’t stand a chance.

After that  Mr. Dove held vigil in the oak near our deck. Always a welcome visitor, a he was a mannerly gent among the raucous jays, chickadees and wood peckers. We will miss him.

The following is a repost in honor of Cat Day! 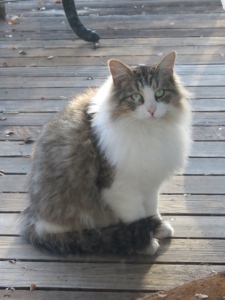 She shows up at our back door every morning looking hungry.  At first we shooed her away 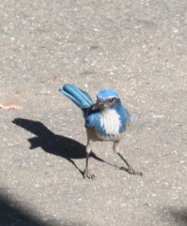 because of this little guy and his friends who aren’t particularly fond of kitties whether they’re pretty or not.

But she would retreat only as far as the hill above us and look down, sometimes sneaking onto the deck when she thought we weren’t watching to gain a prime perch from which to hunt.  As far as we know, she’s not a very good birder.  We haven’t found piles of feathers or half-eaten carcasses.  We did however catch a rat.  Darn, I guess she’s not a ratter either.

Before Christmas hubby began to worry that she might be an abandoned cat so he decided to put out a bowl of Friskies leftover from our cat sitting days to see what she did. 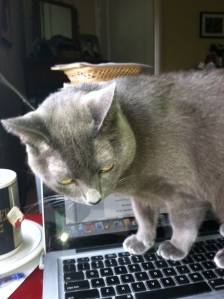 (here’s a pic of Rocket Kitty, our grandcat.

Like many cats associated with writers.  Rocket Kitty provides free editing services whenever he visits.)

Hubby set Pretty Kitty’s  bowl far away from the railing where his other pets (the birds, quail and squirrels) expect their treats but near enough so that we could watch what she did.  Sure enough, she gobbled everything we set out.  Still her coat appears well-groomed, her eyes bright. Maybe she just likes Friskies better than what she’s getting at home.  She still runs when we get too close but gradually she’s let us near enough to snap a few pics so I could go on line and figure out what kind of cat she is.  The closest breed seems to be this one:  http://animal.discovery.com/tv-shows/cats-101/videos/ragdoll.htm

A ragdoll cat is so named because of their propensity to go limp when picked up.  They’re also called “puppy cats” because they like to follow their owners around, particularly when young.  They’ve got big bones, silky fur and bright blue eyes. They are also one of the largest cat breeds. You can see in this pic just how big Pretty Kitty is… 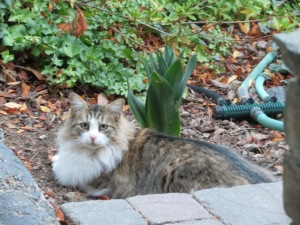 Anyway, six days into the New Year and I’ve already broken my resolution to write only about dogs. Worse yet, I am falling in love with a kitty who probably has a home somewhere and alas my poor heart will be broken once again.  My, my.  2014 does not portent well for the Twissel so far.  Last year at this time, I’d just a signed a contract with Booktrope and expected the sky to open.  It did not.  Now another book’s going through the process.  Will it set the world on fire?  Probably not.  Will Pretty Kitty eventually go limp in my arms?  Who knows.  Each new year comes with a question mark and no promises.  Just hopes and dreams and schemes which may go broke.  That’s why God gave us friends.  Okay, God didn’t give us friends. If you want friends, you’ve gotta work for them which is a better New Year’s resolution than not writing about dogs, don’t you think? 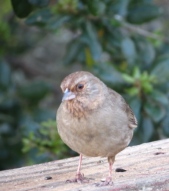 Neither a mountain lion nor a teenage driver but a bird.

Now that all the holiday folderol is over, we should post a flyer about Pretty Kitty around the neighborhood.  Hubby will undoubtedly give a thorough tongue lashing to her owners, if indeed they come forward.  Ours is a dangerous neighborhood for kitties – mountain lions, raccoons and big dogs. Not to mention, teen drivers.

Sigh. I’ll let you know how it goes and again, sorry about the dog thing.  Resolutions are meant to be broken.

Kitty luxuriating in his kitty condo.

Update Oct. 29:  Well, as those of you who’ve followed the blog all year know, Pretty Kitty turned out to be a boy and because of his green eyes, he cannot be a ragdoll. However he doesn’t seem to care.  He’s now in possession of two humans who buy him all sort of treats and cater to his every need.

“What greater gift than the love of a cat.” Charles Dickens