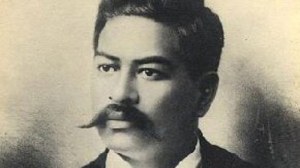 Jonah Kuhio Kalanianaole was Hawaii’s last royal prince. Although he never sat on a throne, his birthday, March 26th, is cause for celebration in the islands. 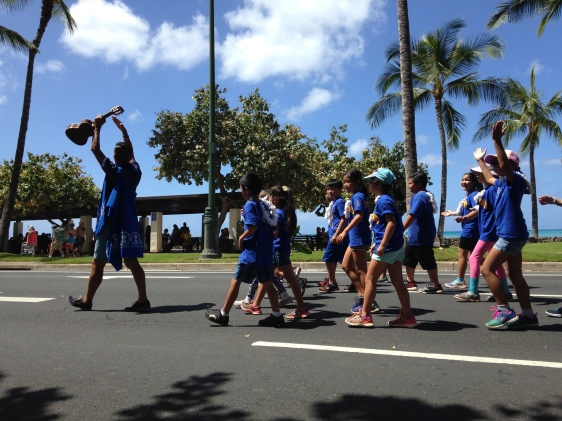 Without Prince Kuhio, Hawaiians would have most likely suffered the same fate as Native Americans, forced assimilation into a culture with little respect for the earth; their traditions and language in jeopardy of disappearing forever. Or worse, watching as cherished rituals were reduced to comic stereotypes.

Kuhio was the nephew of Queen Lili’oukalani.  After she was overthrown, he was briefly arrested for treason and then fled to South Africa where he joined the British Army and fought the Boers. When he finally returned to the islands he did so with a mission: to promote and preserve the Hawaiian culture. Eight times he was elected to the US Congress where he helped secure rights for native Hawaiians.  Rights like, being able to homestead on the lands of your ancestors.

Music is very important to Hawaiians and so for the week leading up to the Prince Kuhio festival, local television stations broadcast events held at schools and cultural centers throughout the islands. Not the kind of music you hear in Tiki bars and shopping centers but traditional songs sung in ancient Hawaiian. 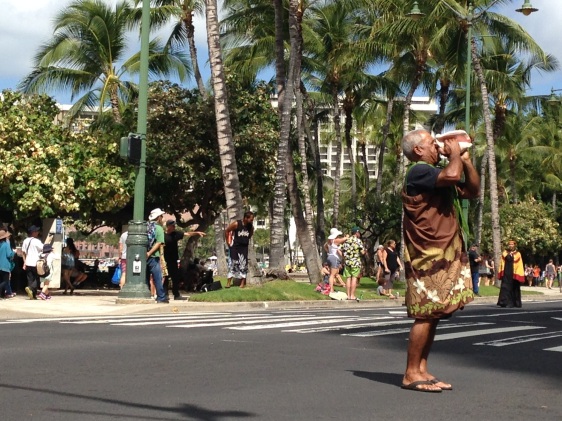 The parade, which kicked off the final day of celebration, began with the traditional blowing of Pu shells to the north, south, east and west. Then came the members of the Royal Order of Kamehameha (descendants of Hawaiian royalty) either walking on foot or driven in convertibles (all Mustangs for some strange reason).  I noticed that many of them had red hair and fair skin.  Hummm.

Many schools marched in the parade, some singing and some dancing. There were hula dancers, both young and old, drummers, horseback riders and even one dragon. 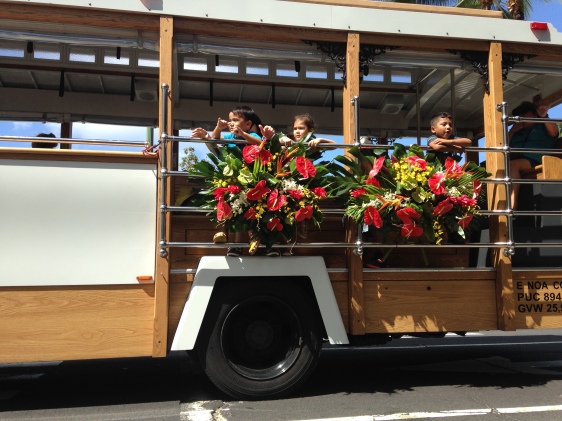 These kids got to ride on a trolley!

After the parade, people gathered in Kapiolani Park near Diamond Head for a celebration that included song and dance and food from a flotilla of food trucks.  All in all, a perfect day and a joyful celebration for a great man.  Happy Prince Kuhio Day!

I just watched the movie Layer Cake, a gritty blood bath in which every other word is “motherfucker” and every character is a con artist who gets shot to shit. The movie ends with Joe Cocker’s rendition of “I’m Just a Soul Whose Intentions Are Good” probably because the movie opens with the protagonist (Daniel Craig) telling us how he’s going to change his evil ways and get out of the drug trade. Poor guy just ends up getting in deeper and deeper until he becomes the frosting on the cake (a metaphor for killing your way to the top of a mob and not for getting some extra special reward).

One of the many dead bodies in Layer Cake

I don’t know what message viewers are supposed to take away from this movie other than drugs are bad and drug dealers are unreliable (really? whod’ve thunk?), but that song sent me running for a Google window. Does that ever happen to you? You hear a song and suddenly have to know everything about it. Who wrote it? Why? And then, of course, you have to blog about it because your followers have nothing better with their time than to read what you write about a song. I really do live a blogger’s fantasyland, don’t I? I need an intervention.

Anyway, if you’re still with me, over the years this song has hit the charts in a number of different genres – rap, soul, blues and, of course, rock and roll.  It’s also been featured in countless movies besides Layer Cake, most notably Kill Bill and The Birdman.

The story of the song’s inception is a sad but probably familiar one to anyone in the arts or entertainment world. A musician of only moderate repute named Horace Ott wrote the original chorus line and melody after a “falling out” with his girlfriend. She took his plea for leniency to her partners and from it they created a song, apparently with jazz singer Nina Simone in mind.That was back in the early sixties when record companies owned the artists and Ott, not being in the proper union, was not included on the original credits. That must have stung. Here’s Simone’s rendition:

Her spin on the song is how it was intended. A plea for leniency. Unfortunately the record did not “chart” as they say and the song went widely unknown until a certain British group virtually made it their own.  You know who, of course, unless you’re really, really young!

Eric Burden’s “soul with a bit of rock and roll” rendition hit Number 3 on the charts and the song was subsequently recorded by a gazillion others including: The Moody Blues, Elvis Costello, Cyndi Lauper, King Kong &D’Jungle Girls, Mike Batt, Trevor Rabin No Mercy, John Legend, Lou Rawls, New Buffalo and many more.  Don’t ask me who some of those folks are because I don’t know.  I did recognize this guy, who generally writes his own songs:

Cat Steven’s plea for leniency and understanding takes on a universal feeling, as if he’s asking the whole world not to be so quick to judge each other.  It’s a good message.