Today, the last of the pictures I took while on a Mission Trail Mural walk down in San Francisco. 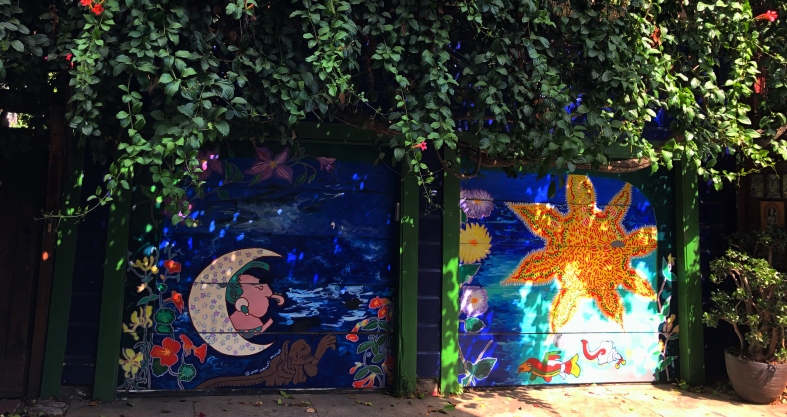 Who wouldn’t want to come home to these garage doors?

The murals in the Mission are an example of a community working together with artists to transform alleys into places where you want to hang out and not simply get through as fast as possible. They reflect the histories and passions of the residents and also provide an escape pod for the imagination. For example, if you look closely in the mural below (painted on a garage door and thus eligible for entry in Norm Frampton’s #ThursdayDoors event) you can see a  figure in the pupil of the eye.  If I had to guess I’d say it’s a soldier in a helmet.

Below the eye is a row of lashes perhaps inspired by Clockwork Orange? 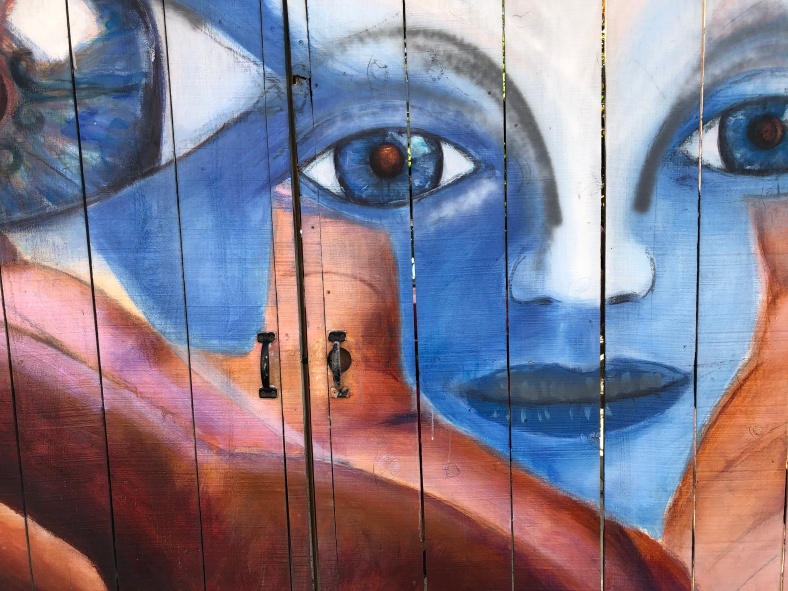 This mural is one of my favorites.  It promises that if you open the door you’ll find yourself in a magical world.

Below is a crowd favorite.  People (particularly women) stood in front of this mural forever and would not move until they’d identified each face of “the women of the resistance.” 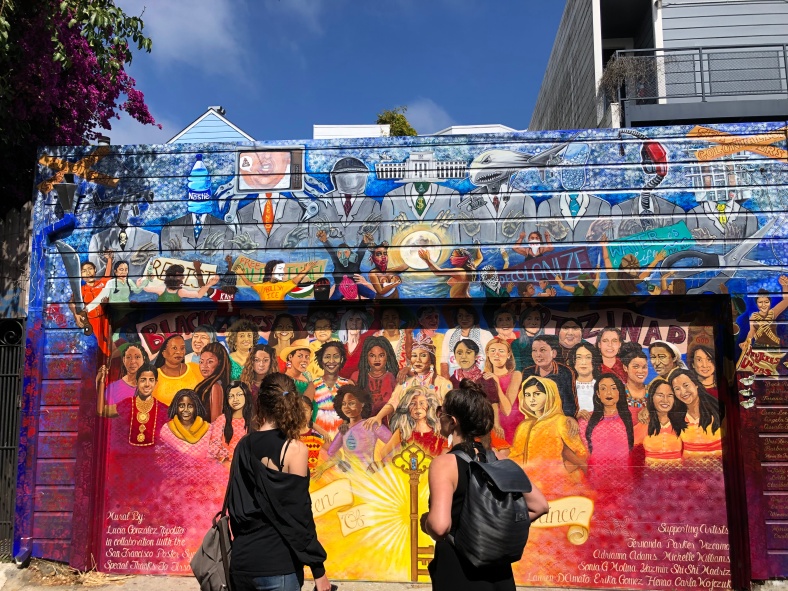 I didn’t even try.  I was more interested in the figures hovering over them (all dressed in business suits). The message was, if you’re wearing a business suit you’re most likely either polluting the planet or a greedy warmonger.

If you’re planning a trip to San Francisco and/or have a particular interest in murals, check out the PrecitaEyes website. This group has been promoting street art since 1977. They even have a museum and a community center. To see other special doors from around the floor, check out Norm’s place.

I have to admit, the following murals from the Mission district in San Francisco (see The Mission, Part 1)  were some of my favorites.

The first one shows women perhaps pleading for news about missing loved ones or perhaps mourning them while above a dove flies towards a group of military men, one of them with dollar bills in his eyes.

Next to it is a mural depicting a joyful harvest.

The text on their rainbow banner reads: “I give you a song like a tribute, like a book, a word, a freedom fighter, like I give love,”  Silvio Rodriquez.

I didn’t recognize the name and so I googled him.  Wow – such a beautiful voice.

On the other side of this particular alley was a mural spanning half a block which depicted a modern day street scene.  This is only part of the mural.  Another section (which I didn’t get a good shot of) shows the police arresting young men.

The third section is perhaps the most powerful. It depicts the banks  pulling the plug on the neighborhood.

And why?  In upper right corner is a sign advertising “Alta Impunidad, Luxury Hipster Community, for techies with lots of cash.”  Just below the sign are two figures in black with canisters on their backs spraying something on the flowers (Blackflag?).   Written on one of the canisters is the word “Facebook.”

Alta Impunidad translates to High Impunity.  I’ll leave you to draw your own conclusions about what the artist was trying to say.

This mural is most likely a tribute to Isabel Allende and Pablo Neruda, both of whom made references to oranges in their work.

Allende wrote of a trip to northern Peru (in My Invented Country):  “Thirst was unquenchable. We drank water by the gallon, sucked oranges, and had a hard time defending ourselves from the dust, which crept into every cranny.”

And Neruda actually wrote a poem entitled: Ode to the Orange

Above is a block party on Mission Street.  Note the tourist with his camera watching the street artists at work and the folks dancing in the street.  There is a fruteria in the middle of the block depicted in the scene and it has its own street art (below) however don’t ask me to interpret this one.  I suspect they were selling more than fruit.

The one below could have been done by the same artist however it has a clear meaning. A woman giving birth to a baby and the ocean.  That one could give me nightmares.

Below is a gallery of this and that. The first two murals are depictions of Frida Kahlo, who along with her husband, is a patron saint of muralists.  The third I believe is a homage to rap stars although I only recognized a few of the names.  Then there’s a group of people gathered around a picture of the Pope (and that’s all I dare speculate on that one.) Of course I had to take a picture of Max sailing out to join the Wild Things.  It was one of my children’s favorite books.

The last one shows the Earth being held up by a couple of indigenous people while parrots hover.  In the lower right is a city bus full of people which seems to have been converted into a space shuttle. In the upper left the eagle clutching a snake could have many interpretations.  I can’t decide if the message of this mural is hopeful or worrisome.   The hope of the world resting on the backs of a few people.

Next time, the plug is pulled.

Not all of the murals you’ll find in the alleyways of the Mission district of San Francisco have an overt message.  Some are whimsical and fun.

Below we have a rooster wearing a crown and angel wings while having his morning coffee.  Above him reads “Protecting our home from gentrification.”  Is he the winged avenger out to save the community from yuppies?  Or is he the developer hell bent on gentrifying the neighborhood? Heck, maybe he’s just a figment of the artist’s imagination.

The following two are side by side. 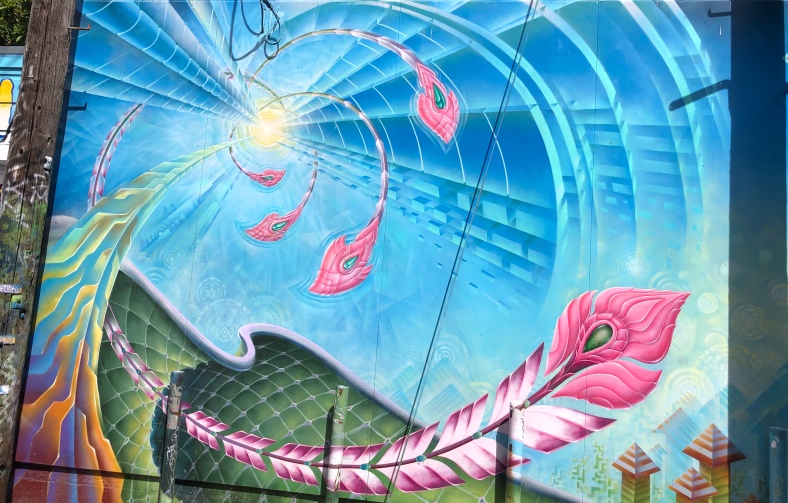 Other murals (in the gallery below) seem to depict a skateboarding Spider Man, Che Guevara fighting a deer-headed man, a space ship taking off, man-sized thorny flowers, a drug deal gone sour, and an elephant god holding pink parasols. (click on any image to see them full size)

Feel free to add your interpretations in the comments.  My favorites of the murals tomorrow.

Today’s offerings of street art (I like that term) were not painted on garage doors (see Part 1) but on the brick walls of a parking lot. Below is a portrait of residents of the area coming together in unity beneath the black and grey images of the leading voices of Civil Rights movement.

The following murals seem to reflect a much earlier era, however, note the wall and beyond, towns on the hills out of reach.  The graffiti on the wall reads “We didn’t cross the border; the border crossed us.” How true. 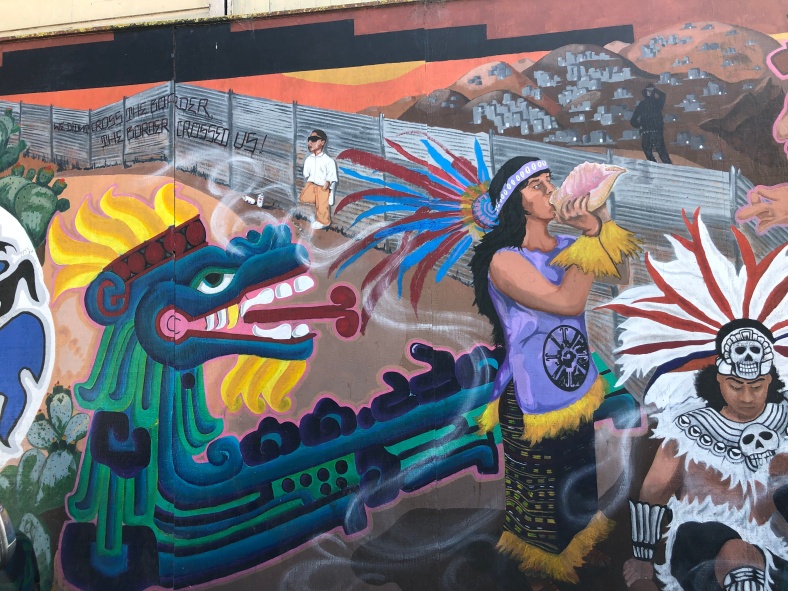 It was impossible to capture the following mural without including the top of someone’s car!   Note that, although it appears to depict an Aztec priest holding an orb of some sort, in the lower middle is a man with a backpack. Hum, what to make of that?  (I jest.  That is an actual man with a backpack who somehow got into the picture without me noticing. He shows how large some of these murals are.)

The owners of the Victorian across from the parking lot were obviously trying to blend in. 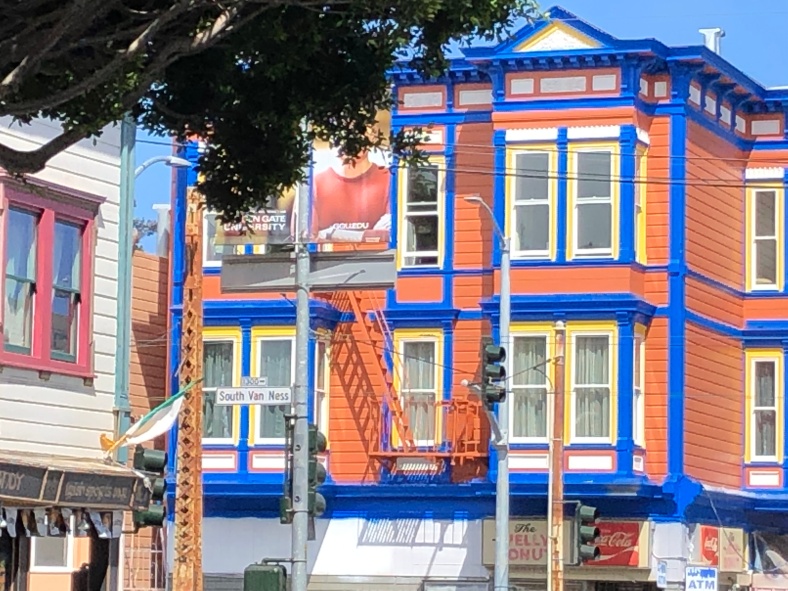 Below are images that I really couldn’t make sense of.  Can you?

Next time some of the more whimsical murals.