I wish I wrote about cheese.  Life would be so much simpler.

I don’t know about other writers, but I have a hard time describing my work without babbling on and on and there can be nothing worse in the whole wide world than an artist who babbles on and on and on about their work.

For example, yesterday I attended a baby shower held in (believe it or not) a trophy room.  Picture a cavernous, two-story room crammed with the bodies of lions, antelopes, sheep, goats, tigers and bears, all mounted as they would appear in the wild by the best taxidermists money can buy; on the walls the heads of other beasts, as well as sport fish on plagues and exotic birds perched as though about to take flight.  The challenge of how to cheer up the room for a baby shower was solved by placing teddy bears – hundreds of teddy bears – all around the room and even on the backs of some of the beasts.  In addition, the big game hunter responsible for all the trophies put a bonnet on the head of the howling baboon and a pink cowboy hat on the charging lioness.  The mounted beasts were not spared.

We were not allowed to take pictures in the trophy room so you will have to depend on my amateurish drawing skills and your imaginations.

The water buffalo got a pirate hat, the moose, a beret.  And so on.  The elephant head was the only trophy spared the indignity.

During the shower I chatted with a fellow guest, someone I rarely see, who I will call Wendy because that’s her name.  Here’s how it went:

Wendy:  What have you been up?

Wendy:  What’s it about?

Wendy’s eyes begin to gloss over. Not so subtly, she glances around the room, hoping to spot someone who had not written a book.

Me: It looks like I’ve done an outstanding job of boring you to death.

Wendy: (who is too intelligence to lie): I have a client who writes about cheese.

You can guess the moral of this tale. Don’t blab on about your book or you’ll end up as popular as a howling baboon in an Easter bonnet. 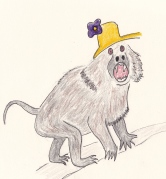 No animals were harmed in the writing of this blog, just badly drawn.