This week I’m going through the edits of book two, tentatively called The Graduation Present 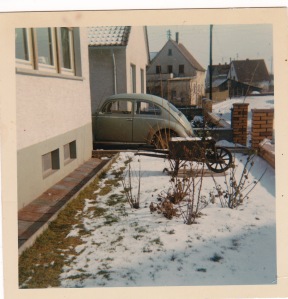 I traveled all over Europe in this ancient VW bug… Only broke down once!

The story is very, very, very loosely based on the year I spent in Europe back in 1970, a time when two wars waged – the Cold War and the Vietnam War.  However it was a different war that still cast a dark cloud over the continent.  World War II.  The heroine/narrator suffers from overactive imagination syndrome thus when she is thrust into perplexing situations, she overreacts. It doesn’t help that her guardian is a paradox.  On one hand he is a hopeless romantic, a sappy sentimentalist and gregariously generous.   On the other, he has a bawdy sense of humor that borders on lewd, cannot be pried from Happy Hour, and he may work for dark forces of evil lurking within the CIA. 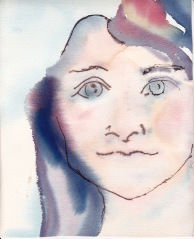 “Jan at fifteen” by Connemoira

What results is a comic romp through Europe to solve a mystery which may not exist as our heroine, Miss Riley Ann O’Tannen, learns that wars cast long shadows but somehow people survive.  They might not survive with the same hopes and aspirations as privileged Americans, but they do survive and usually with a realization of what is really important.  Pub date is in May 2014.

On to Pretty Kitty news: 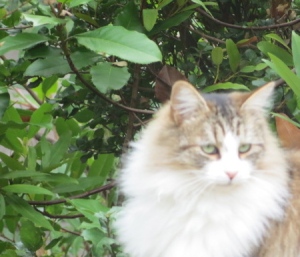 Rice flavored with garlic? You gotta be kidding. 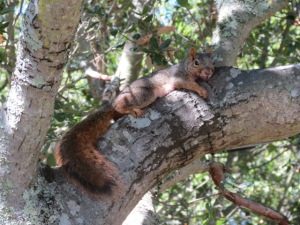 The squirrels continue to be pissed that hubby is cavorting with Pretty Kitty.  They’ve taken to chattering angrily at us from tree limbs.

The mourning dove waits for his mate to return.

I end with the sad story of this mourning dove.  He used to have a mate (mourning doves mate for life) however then the hawk came along and now the one sits in the cherry tree near where his mate was killed and waits.  Apparently hope knows no end for the mourning dove.

5 thoughts on “The Mourning Dove Hopes”