Writers face many challenges when their characters are based on real people. The first challenge is, what if the person recognizes themselves and takes umbrage? Then you’ve lost a friend, a brother, a father or maybe an uncle. The second challenge is, how to integrate those characters into a work of fiction, making it clear that the actual person never said the words you put into their mouths nor did the crazy things you made them do.

There are two characters in FLIPKA who are based on actual people. The first is the character of Fi Butters.  I gave her the voice, mannerisms and cocky attitude of a dear friend who actually had an MA in psychology and worked back stage at a Vegas show (she even spoke a little Russian).  She did not, however, travel to a girls’ reformatory to solve a mystery involving bat caves, a 100 year old journal, and government secrets.  I gave her that adventure after she passed away too young.

The second character is Captain Wug.  To him I gave the voice, mannerisms and love of vocabulary belonging to a man by the name of Worlin Urquhart Grey my father’s flying buddy.

“I don’t think I have learned enough to advise you. Just observe the nuances of culture as you go through life. Everything changes. Things happen. Sometimes it seems like it is the end of the road, but it isn’t.”

This man really loved words. In fact he loved them so much that he spoke in long strings of obscure words often alliteratively.   I first got to know Wug when I attempted to babysit the Bellicose Barbarians…er… his four youngest sons, all of whom were under the age of eight (in fact, Dirty Dealing Dougie, was in diapers)  They lived in a two story house that wasn’t nearly big enough for the trampling mischief that four energetic boys can cause, thus Wug left me the first evening with this admonishment:

“Should these pugnacious jackanaps  lead you to perdition, unnerve the rabble-rousers with mention of the Black Snake.”

“The Black Snake?”  I asked.  He opened the door to the pantry and pointed to a long, thick, black leather belt hanging menacing on the back of the door.  I was horrified.  “I can’t do that!”

He chuckled.  He had a low voice and cackle that reminded me of a Welsh poet I was enamored of (Dylan Thomas.)  “You’ll not need to do the deed my dear, just issue a dire warning with injurious intent.”

He was right. The boys would all settle down (except for Dirty Dealing Dougie) if I even uttered the phrase:  “Black Snake.”  I can’t say that they became perfect gentlemen but they did cease and desist from clubbing each other to death.    As a practical joke I bought him a three foot long stuffed snake for Christmas one year.

He retaliated by bringing me back a ring in the shape of a cobra from Thailand (he was Pan Am pilot whose route was the far east).  It had sapphire eyes and a tiny ruby at the end of its tail.  I lost the ring or it was stolen and I’m sure the stuffed snake has not survived but I’ll always have the memory.

He recently passed away.  Below is his obit. Of course bagpipes were played. 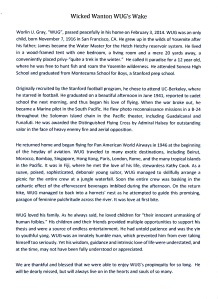 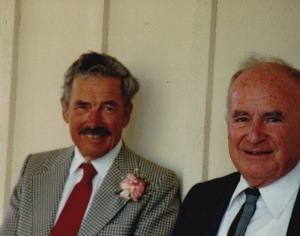