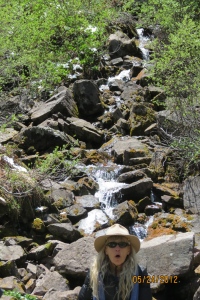 Carol in the creek for some reason: “Hot damn, that water’s cold!”

Nothing my friend Carol does surprises me though often I’m left scratching my head and vowing to never again get involved in any of her shitteries (being stranded at three in the morning outside a hospital after a horse kicked her in not one but both legs comes to mind!). I’m sure she’s felt the same about me from time to time. But long ago I realized: friends are like condiments. You need a combination of the spicy and the sweet. Sometimes you need a jolt of tabasco and a wild ride through the mix-master to make a memorable meal. Besides, she’s a clever and amusing writer, generous and loving towards her friends and quite a hoot to hang out with (unless she’s getting you into trouble).

(shitterie – a Carol-made-up term generally meaning a misunderstanding that ends up tussles and tantrums!)

“What’s taking you so dang long Jan?” (Carol on the ridge prancing around while I’m huffing and puffing to get caught up!)

Anyway, her latest adventure is a ten day trek through the Australian outback with a couple of elderly horse women. Since these jaunts generally result in some amusing tales I’ve asked her if I can share them with my blog readers and she said yes.  So everyone – welcome the first episode of Carol in Oz  (via her friend Griselda’s iPad, thus the shortcuts):

We r packed except for final items and will leave around 10 after breakfast, run and showers. Taking loads of food and big containers of water.

We r headed into a huge reserve called the great western woodlands. G. has a book on it which I’ve been reading. Natural areas w all sorts geology plants animal life but also gold mines and grazing.

It’s cold this morning!  The neighbour is bringing me all sorts of large mens clothing to borrow bc he is worried I will freeze.

Still waiting for unlock code to use my phone. Will keep msgs  minimal while using G,s iPad, she has data limits and pics or calls can eat that up fast.

We r taking iPad and my phone in case the code comes and I can make it work on my own. Connections available only when we r near towns I think. Will b gone roughly 10 days.

Will use a roo (kangaroo) as there r no alligators in my vicinity.  So far anyhow…

Wish me luck. My dear old bod is likely to b challenged

According to the Nature Conservatory, the Great Western Woodlands in southwestern Australia is “a blossoming bullseye of biodiversity.”   I’m not sure what Carol plans to do with the roo – I guess we’ll have to wait until the ladies are near civilization to find out.

The Great Western Woodland, picture from the Nature Conservatory