In Charleston South Carolina it takes a lot of money to be an SOB. You also have to be willing to live in a house that’s over 200 years old but which you cannot change the exterior of in any way other than to repair or repaint. And don’t expect to get around your neighborhood easily. You have to share the road with an endless stream of horse drawn carriages filled with people snapping photos of you in your bathrobe.

Note the lady in pink on the balcony trying to escape my camera.

The SOB, which in Charleston stands for South of Broad (street), is an enclave of historic buildings on narrow sometimes cobblestone streets. Although there are strong restrictions concerning remodeling, they were built in a variety of architectural styles ranging from Queen Anne to Art Deco. Every effort is made to save these beauties, however sometimes they burn down or simply can’t be repaired.  Any new building must resemble one built two hundred years ago.  As you can imagine, that would be quite a challenge.

You can either take a guided walking tour through the SOB or a horse-drawn carriage. It was 85 degrees and humid so you can probably guess which one we chose. 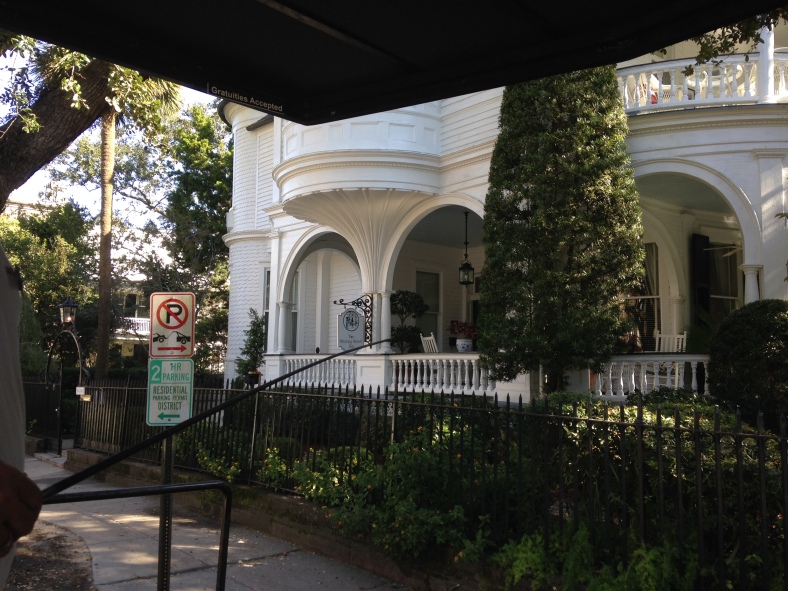 A Queen Anne given as a wedding present to the daughter of a Confederate millionaire.

I have to apologize for the quality of the photos.  We were at the whims of Jack, a horse who didn’t like to stop even when we were at a stop sign.

But he is a handsome dude, don’t you think?   You would expect with as many horse drawn carriages as they have in the SOB the streets would be knee deep in you-know-what  but they’re not which led me to believe Charleston has an army of horse poop picker uppers who, like the street sweepers in Disneyland, work in stealth. The streets were always miraculously horse poop free though no shovelers were in sight. 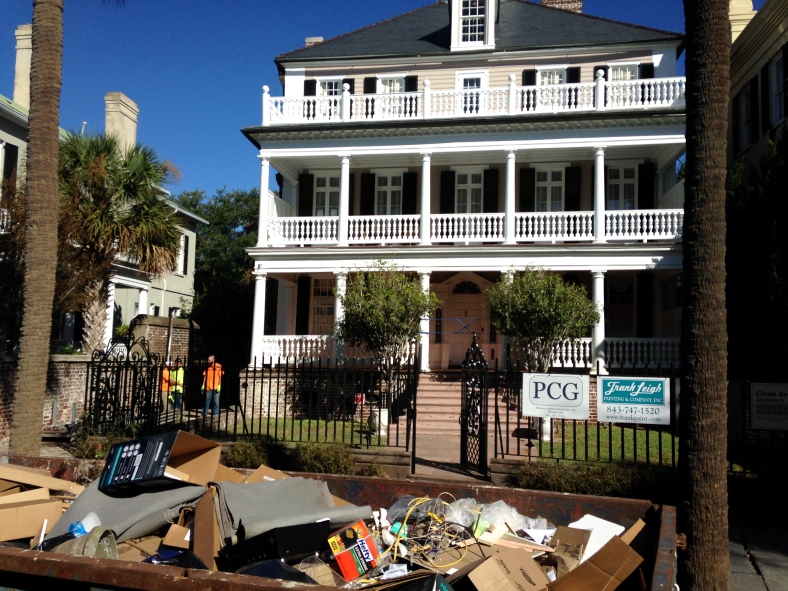 One of the few houses undergoing some sort of renovation

Characteristic of homes in this area are balconies that could host tennis tournaments.  Many face the street but along the waterfront, they face that vile reminder of Northern Aggression, Fort Sumter, which I talked about last Thursday.

An example of pineapple gates

Another thing you see in the SOB is intricate iron work on gates, fences, and windows.  Their purpose was not entirely decorative.  They were installed as protection against slave revolts but of course they have to be lovely and not coarse and vulgar.  Racism in the south is laced with the nuance of genteelity.

During the Civil War, genteel Southerners surrendered anything made of iron to the Confederate Army to be melted into munitions so they could keep the right to own human beings. Those bullets and cannon balls shredded many an arm, a leg and heart but over the years they’ve been replaced.

This is one of the oldest houses in Charleston, built in 1772 in the Georgian style by one of the signers of the Declaration of Independence, Thomas Heyward. Today this house is a museum primarily because George Washington once stayed here. There are a number of houses and plantations in the area built by Founding Fathers who themselves owned slaves and believed women shouldn’t vote. I don’t know what to tell you all but it’s sinking into the sea so if you want to visit the City of Facades you’d better visit soon because every morning the streets are flooded with seawater which the non climate change believers  have somehow accepted as normal.

No one can live in a house over two hundred years old without changing the exterior which it appears we in the USA might have to do.

Please skip on over to Norm Frampton’s #ThursdayDoors event to see other doors from around the world.

20 thoughts on “ThursdayDoors: The City of Facades”