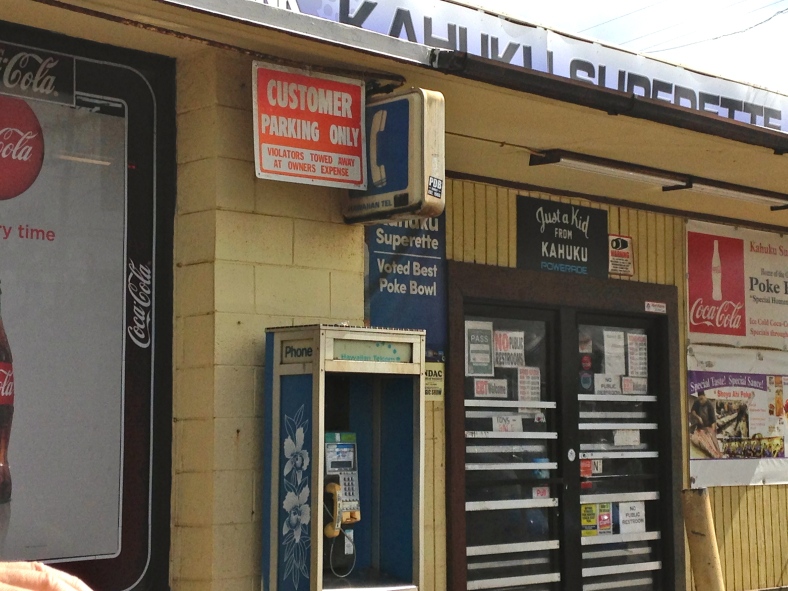 Today we return to Hawaii to find doors (last time I promise).  These doors lead to the Kahuku Superette in the small town of Kahuku on the east shore of Oahu. They might not look like much but on the other side you can experience the  Best Poke Bowl in Hawaii (according to them).  We had no idea what Poke Bowl was and took turns guessing.  My guess, it was a bowling alley where they used coconuts as the balls and pineapple as the pins. 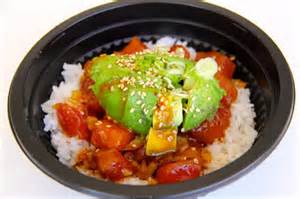 If you’ve clicked the link above you know how far off base I was. It’s Hawaiian fast food.  A Poke Bowl has a base of either white or brown rice, chips and/or salad.  Followed by the condiments: white onions, sweet corn, carrots, seaweed, cucumbers, avocado and/or mango and the poke (raw fish): salmon, tuna, albacore, spicy tuna, shrimp, crab, scallop, hamachi, and unagi. Then you have your choice of sauces: original (mild/spicy), spicy mayo, unagi, Japanese Kimchi, honey avocado and/or miso. Last but not least,  Poke Bowl is topped with any or all of these garnishes: masago, sesame seeds, ginger, wasabi, and green onions.

Is your head spinning yet?

Poke Bowls are served differently, depending on what part of the island you’re on. 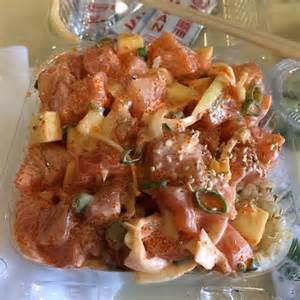 We’d stopped at the superette to pick up water and pretzels for the nearby beach (which was rumored to have calmer waves than the North Shore). Squeamishly we passed on their world famous Poke Bowl.

One more pic of the wild waves and then Aloha Hawaii! 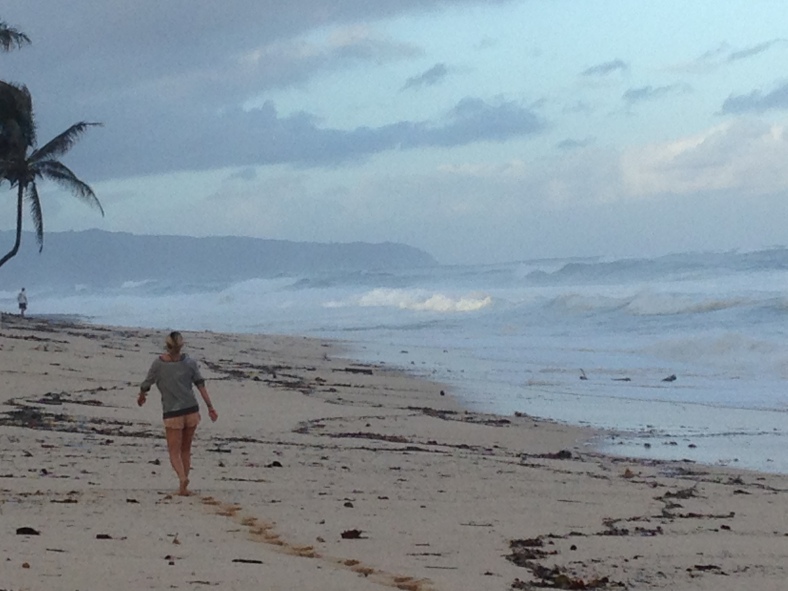 By the way, if you find yourself craving a Poke Bowl, I’ve read that they might become the next rage in the culinary world!

Check out other doors at Norm Frampton’s #ThursdayDoors challenge here.

Ever since we left Hawaii I’ve had this song stuck in my head:

And so I thought I’d share the joy! Now you can spend all day singing “Are you going to the Hukilau, the huki, huki, huki, lau?”  Even my cat has gone somewhere to hide.

Hawaii is one of the many places I’ve been to that I really didn’t want to leave. However, at times the angry sea didn’t seem to want us to stay. 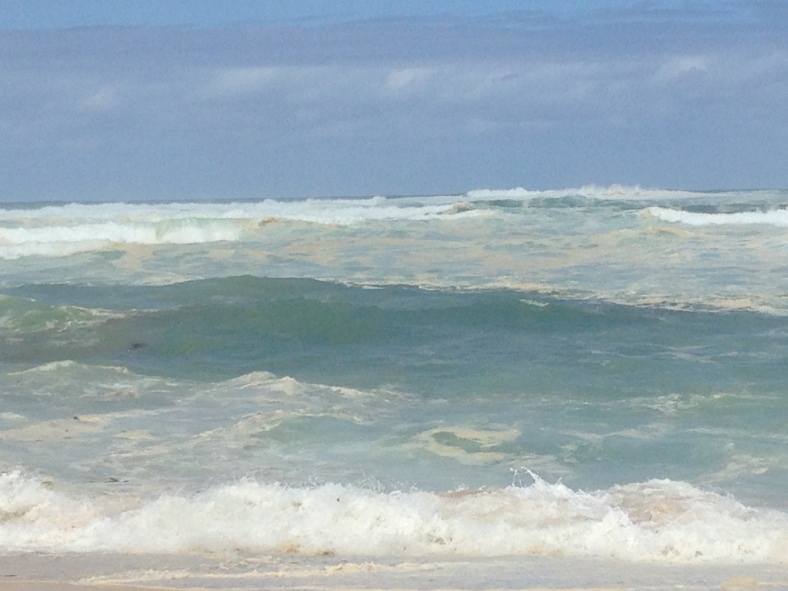 Thirty to forty-five foot waves which during high tide on a full moon night literally came knocking at our back door!

We stayed on the North Shore of Oahu, a laid back haven for surfers from all over the planet. Aside from the Turtle Bay resort, this area has strongly resisted over-development and prides itself on retaining some of the old Hawaii feel. 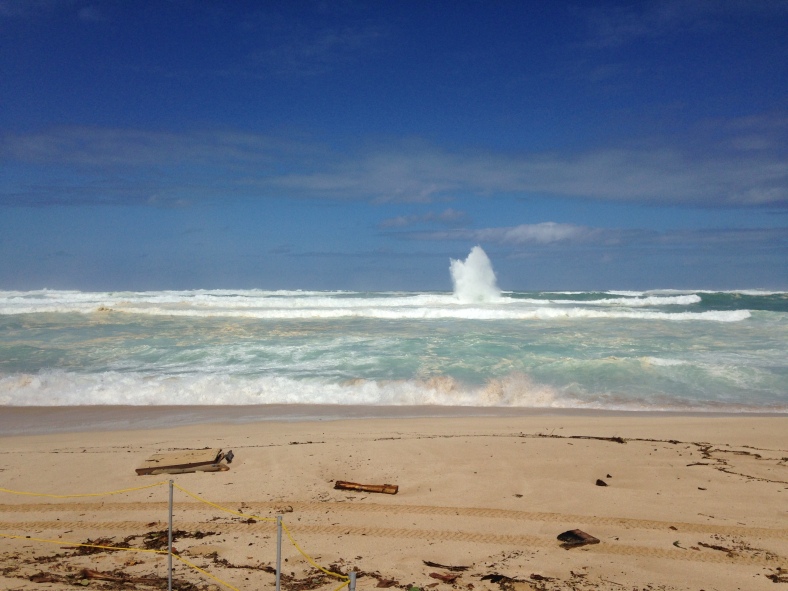 Sometimes the monster waves would collide far off shore and spout into the air like a geyser.  A surge this large hasn’t happened for decades and so you can imagine the excitement it caused, particularly as the timing coincided with one of the North Shore’s most beloved events: The Eddie Aikau Quiksilver Invitational.

“Eddie” was one of the first lifeguards at arguably the most beautiful surf spot in Hawaii, Waimea Bay.  He gained fame not only for rescuing people from the deadly surf but also for his skill on the long board. However it was his final, selfless act that gained him the most fame.

In 1978 Eddie joined the Polynesian Voyaging Society on a second migration attempt from the Hawaiian to Tahitian Islands in a traditional voyaging canoe.  Twelve miles south of the island of Molokai the canoe capsized and it was Eddie with his long board who volunteered to paddle ashore for help.  He was never seen again.  Today it’s quite common to see people with teeshirts and bumper stickers reading “Eddie would go” on the North Shore – a testament to this amazing and charismatic guy. 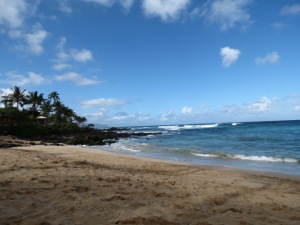 Waimea Bay when the waves are gentle (well, relatively). 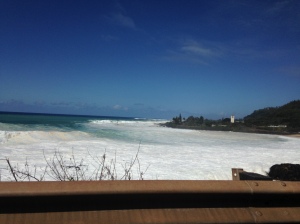 Waimea Bay during the storm surge – it looked like a washing machine with too many suds! 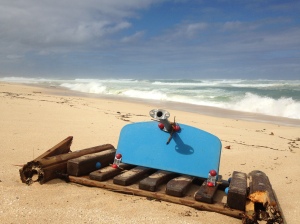 Debris washed ashore. Who knows what it was!

So many people decided to take the trek out to the North Shore to witness the monster waves that they had to close Kamehameha Highway.  If the two lane road wasn’t flooded, it was jammed with slow driving lookie-loos! 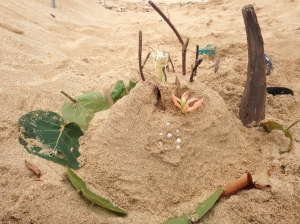 Since we couldn’t go out in the waves, we built a sand castle. 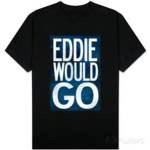 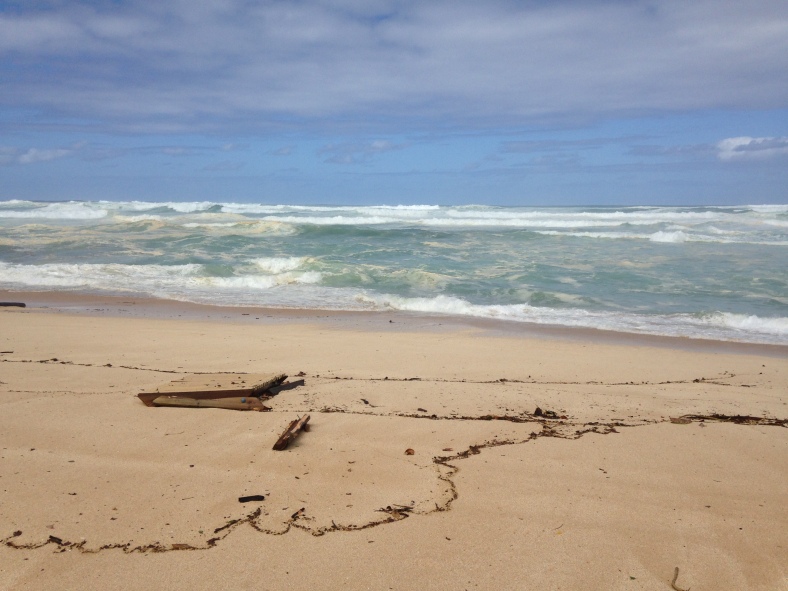