Many people believe that newspapers are obsolete.  You can, after all, get your news on the internet for free so why pay? Aside from the fact that online you have to put up with numerous pop-up ads just to read the headlines, sometimes it’s nice just to unplug.  To sit with a cup of coffee and read articles researched and written by local reporters who have a vested interest in what is going on in your neck of the woods, who write with wit and passion and deserve to be read and not buried five clicks down and behind an ad for Depends. 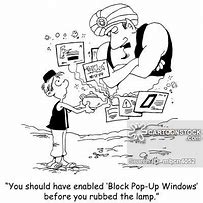 Here are some of the local stories that caught my eye in the San Francisco Chronicle last Saturday, March 9th.

First, this article has a catchy headline that infers osprey watchers have been having vision problems.  Oh dear,  Was there some kind of eye infection that affected only people who liked to watch ospreys?  Why? And last, what was the cure that has them seeing clearly now? 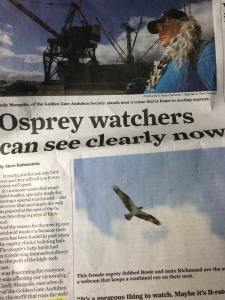 It was a … drumroll please … a three thousand dollar remote control windshield washer.

According the SF Audubon Society, over 70,000 people are addicted to watching the mating habits of an osprey couple via a webcam installed downwind of their nest. But when a bird’s gotta take a crap, he doesn’t much care where the wind takes his treasure, no matter how many followers he has. And so Richmond Osprey has made quit a mess and osprey viewers are suffering. There hasn’t been too large a public outcry because Rosie Osprey has been off clubbing in Mexico, as is her habit every winter. But soon she’s returning and no doubt expecting Richmond to give up his bachelor ways to service her at least eight times a day “live and in color” for all to see. Some poor member of the Audubon Society will probably be on call twenty-four seven to activate the windshield wiper when necessary but I’m sure it will be a sacrifice made happily.  If you also like to watch ospreys mate, here’s the link.  I can’t guarantee you an x-rated experience but you may get lucky:

There is, however, a darkly ironic side to this story. 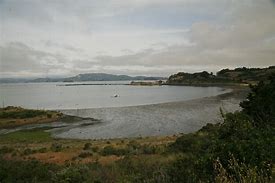 For at least a decade a friend of mine has waged a frustrating battle to save the shoreline that provides eelgrass for the osprey and other wildlife  from developers hellbent on building subdivisions and casinos. She and others in the Pt. Molate Alliance have provided plans to the city for an eco-friendly nature center, picnic areas and hiking and bike trails which would provide Richmond residents with a million dollar view of the San Francisco Bay.  They’ve also documented the perils of overdeveloping that area from increased traffic congestion to the environmental impact.  But they’re up against big money in a community famous for poverty and high crime. 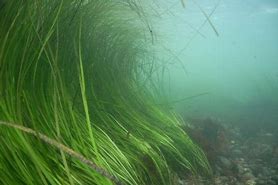 While she is happy that people enjoy watching these incredible birds, she wishes that money had been spent fighting the greed that will put them at risk once again.  I agree.

When monkeying around was a job creator and kid favorite
by Gary Kamiya, the author “Cool Gray City of Love: 49 Views of San Francisco”

Now I think of monkeying around as cheating on one’s partner. That’s just where my mind goes, folks.  So how could that be a job creator and kid favorite?

Rats! I was fooled again by a clever title.  Building monkey houses for local zoos was one of the projects that got people back to work after the Depression. The one at the San Francisco Zoo was particularly popular however it was not rebuilt after 1989 Loma Prieta earthquake damaged it beyond repair.  The reason why?  The residents, spider monkeys, expressed their displeasure at being held captive by dangling their butts over the mesh tunnel leading to their island and defecating on the zookeepers.  These monkeys also ran in gangs and followed leaders who were often described as “gang bosses.” It was a regular West Side Story on Monkey Island.  I’m sure the zookeepers probably said “It’s either them or us!”

It’s a sad commentary on the times, but I bet Life and Death on Monkey Island would get more views on a streaming webcam than Rosie and Richmond’s last tango mid-air. 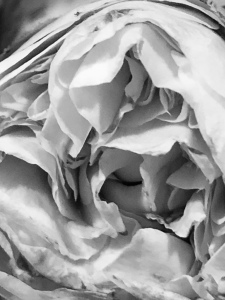