August … you scumbag. You hideous rot of shit.

Choking the moon in the gas chamber created by your dragon breath.

The fog rolls in but traps some poison near the sea,
blowing the rest into the mountains
where we three breathe in gin and vodka and tequila
and dine on mother’s chocolates
but she doesn’t care.

She does, however, mind our laughing,
for it’s a party she cannot attend,
trapped as she is in a morphine maze,
a tear at one point I caused. I am sorry mother.

August, I despise the sight of my green bean plant,
chewed to the ground by those beasts you sent.
Those ugly sightless pirates tunneling through
hard dirt wrung free of moisture,
incapable of providing life …. just death.

Even the buds on the Red Squill,
close quickly after bloom,
leaving me to wonder … what next, September?
And past then … plant, will you disappear
for years and will I want you to return again?

Generally to escape a hot and smokey day I turn on Turner Classic Movies (TCM), a channel that airs primarily movie classics.  Take me away to the frozen tundra of Dr. Zhivago or the beaches of The Black Stallion. I don’t care.  Any place but here.

However, yesterday, they were broadcasting movies set at the height of the Cold War, 1964, an era of bomb shelters, duck and cover exercises and squadrons ready at any moment to start World War III. Of course that year I could care less about the end of the world.  The Beatles had landed and all that mattered was which one I was going to marry.  I was leaning towards George but then John was so clever and Paul kept telling me with babyfaced sincerity how much he loved me. So it was a hard decision.  Other than chocolate, they were literally all that existed in my addled pre-teen brain.

I do remember Dr. Strangelove or How I Learned to Stop Worrying and Love the Bomb because it starred another great love of my life, Peter Sellers.  It may have the same premise as Fail Safe, the movie I saw yesterday, but Strangelove is so off-the-wall wacky that at least you get a few laughs.

Fail Safe takes itself much more seriously.  The movie was shot in black and white, using as many sharp edges and deep shadows as possible.  Thus, it’s one of those movies so hyperreal that when a character lights up a cigarette you can smell the smoke.  I turned it on just as a squadron of high speed jets carrying nuclear weapons reach the so-called fail safe boundaries. Because of an earlier, misidentified blip on the radar, they assume the US has been attacked and that they have been given the green light to bomb Moscow. 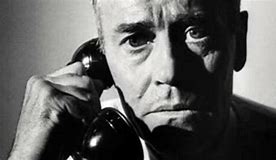 By the time the Central Command figures out what has happened, the pilots have entered a mandatory state of  radio silence.  Enter the President (Henry Fonda) to save the day. At least that’s what I hoped so I stuck with it.  What follows is a heated debate between generals and their “experts” about what to do. The final decision is to send a group of jets on a doomed mission to shoot down their own colleagues.  By this point the Soviet Premier is on the phone with Henry Fonda who promises if our bombers can’t be stopped, he will bomb New York City.  Bye, bye Moscow.  Bye, bye Manhattan.  It’s not the sort of movie to perk you up. On a hot and smokey day, you want Henry Fonda to save the world.

Of course the plot is about as believable as, I don’t know, Dr. Strangelove.  But the ending  is unforgettable.