In a truly bizarre twist of fate, Via, AAA’s travel magazine, just published an article touting Highway 50 from tiny Baker Nevada to the teeming metropolis of Ely, as a “Great Drive” and no, I did not pay them to do so.  You see, this drive takes you past Steptoe Valley, the spot where Fi Butters, the reluctant heroine of FLIPKA, stops for Cheetos, Pepsi and directions from a cigarette puffing cat taxidermist.

One of the highlights of the Baker – Ely drive is this photo op!

Imagine Clark Griswold, the hero of the National Lampoon Vacation series, reading this article and then announcing to his family. “This is it! The next great Griswold family road trip!”

As they huddle on the couch groaning Ellen, Clark’s sensible wife, opens her lap top and googles Baker Nevada. “Oh Lord, Clark. It’s out in the middle of nowhere!  Four hours from Salt Lake City!”  She takes another look at the directions and gasps, “Oh my God.  Look at this route! There’s nothing between Delta Utah and Baker.  Nothing but dry lake beds – not one town. Where would we stop to…you know?” 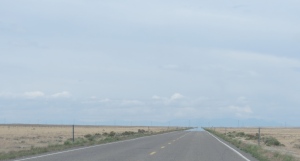 Highway 50 east heading towards Delta from Ely. No plant big enough to squat behind for 100 miles.

Clark ignores her as he googles sites of interest in Delta Utah.  “Hum,” he points out, “we could visit the Gunnison Memorial. That’d be fun.”

“What’s great about that?”  Rusty whines.

“Well, son, It’s the site of an Indian ambush quite possibly orchestrated by Brigham Young, himself.  You know the…”

Clark rubs his chin. “I guess you’re right, Rusty my man.  It looks like just a plaque by the site of the road. No museum, no nothing. Hey, how about this one?  The Topaz War Relocation Camp?”

“A concentration camp?” Audrey gasps.”Where the government put all those poor people in WWII just cause they were Japanese!  Eww.”

Clark realizes a mutiny is afoot. “We could drive to Baker from Vegas.  You like Vegas, right kids?”

“At the Excalibur,” Audrey chimes in.

“No!  Treasure Island!”  Rusty counters, punching his sister in the arm.

“Where’s your sense of adventure, kids? Highway 50 is the loneliest highway in the world!  We could rent an RV and stay at this place. Major’s Station Bar and RV Park!” 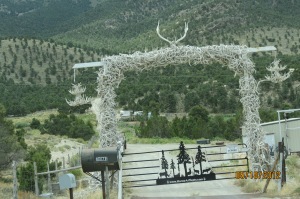 Ellen goggles the route from Vegas.  “Clark,” she sighs in exasperation.  “That route’s not any better.  It’s four and a half hours from Vegas to Baker and the only places to stop are two itty-bitty towns: Caliente and Pioche.  Read what it says about Pioche, “… one of the roughest towns in the old West!”

“Let’s go to Desperation Nevada!” Rusty blurts out, looking up from his Stephen King novel.  “That would be sick!”

*Stephen King wrote Desperation after a harrowing trip through Nevada. There really is no such town.

The Griswolds on their way to Desperation Nevada in a rented silver Airstream.

8 thoughts on “Highway 50 Road Trip with the Griswolds”