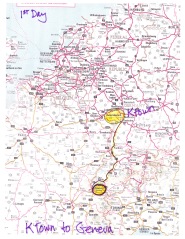 Day One: We began our  trip in K-town, and, because there was no other direct route,  felt  we had to take autobahn to the Swiss border, otherwise we’d never get out of Germany.

An autobahn is Germany’s answer to the Indy 500, a three lane highway on which there is no speed limit.  For a Volkswagen Beetle, whose top speed is 50 kph, it’s also a Death Trap.

This was my second time on the autobahn, the first inspired this section from The Graduation Present.

I shrunk as far as I could down into the backseat and closed my eyes, positive that my first day in Europe would be my last. What a waste! Dying before I’d seen anything other than the Frankfurt airport and the autobahn, my body parts indistinguishable from the metal of a dozen cars when the inevitable pileup occurred.

To be on the safe side, Carolyn and I never left the slow lane, but it didn’t matter.  Those mighty monuments to German engineering – Audis, BMWs and Porsches –  rocketed past us at speeds of up to 200 kph, blowing the poor little car off the road and onto the shoulder like so much dandelion fluff, again and again.  Caroline said not a word as horns blared for no good reason, lights flashed and red-faced drivers shook their fists in disgust.   Apparently  the German government  encourages macho nincompoops to have ego-fueled temper tantrums with impunity on autobahns (“mine’s bigger and faster than yours, etc.”)  Never again, I vowed as we reached the Swiss border. Never again would I go on an autobahn.

The scenery was so spectacular in Switzerland  that Carolyn and I spoke in nothing but Wows. At every twist and turn, every serpentine lake or Disneyesque village – wow, wow, wow.

This Swiss guy probably also thinks he’s better than all of us! Humph!

However, the men were another story. Oh, they were reasonably good looking, but not at all interested in talking to tourists which made us think that, because Switzerland did not have the same problems as the rest of Europe, they felt superior.

By the time we reached Geneva we decided the country deserved an A+ for scenery but only a D- for men.  I know that seems cruel but there’s no bigger turn off than condescension.

After checking into our one star hotel we decided to give Swiss men another chance to raise their grade.  I mean, a D- is kind of insulting.  It didn’t take long before we ran into these three gents. 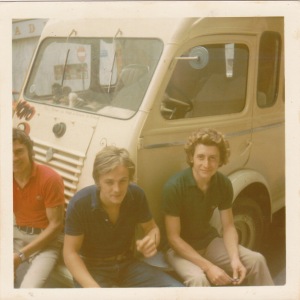 They were very friendly, particularly Michel who kindly put up with my massacre of the French language.  They were so friendly that we were about to upgrade Swiss men to an A when Michel told us they were from Brittany, thus they were French, not Swiss.  Too bad Switzerland.  They invited us to dine with them that night in the Maman Deux – an old delivery van that they’d repurposed to serve as a home away from home during their travels. Carolyn wasn’t too keen on the idea of dining with three men she couldn’t communicate with at all, especially after she ran into and chatted up a well-dressed middle-aged man in the lobby of our hotel who spoke English.  He was her “type,” she said (a man who acted as if he had money).  Then she tried to get me to cancel dinner in the Maman Deux to be part of a foursome which would include the middle-aged man’s much older traveling companion.  I dug my heels in, of course.  Then I pissed her off by asking why a man who invited us to dinner at one of Geneva’s supposedly better restaurants was staying at a flea-bag hotel.  She took my point.  We kept our date with the Maman Deux. 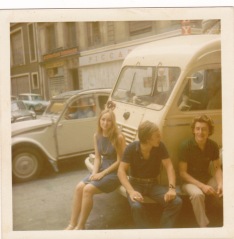 Our dinner consisted of scrambled eggs cooked over a butane stove, a bottle of red wine and a baquette.  I can still remember watching Michel crack the eggs and then scramble them in a pan of sizzling butter. Gotta love a man who cooks – even if it’s just oeufs in a van.  But in the morning we were heading off to Nice and they, returning home to jobs, girlfriends, etc.  Geneva was the end of their adventure and it was the beginning of ours.  Au revoir, Michel!

That night the phone rang and Carolyn answered.  The hotel staff spoke little English and Carolyn, of course, no French.  I don’t know why she didn’t hand the phone over to me. Perhaps she was still peeved at missing a date with a man who might provide more than oeufs in a van.  I don’t know.

This is how the conversation went.

“Hello,” said Carolyn.  Then after a few minutes, “Hot cocoa.” Then a second later with irritation.”I said Hot cocoa.”

I asked who it was and she said it was the front desk wanting to know what we wanted in the morning for breakfast.  I pointed out that chocolat chaud was the French phrase for hot chocolate, not cocoa.

“Well, they understand what I said,” she huffed.

Yes, readers, she was still pissed. 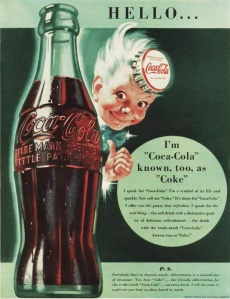 Sure enough, the next morning there was a knock at the door.  We opened it and there stood a young man with two bottles of steaming hot Coca Cola, each wrapped in a towel.  He had a very funny look on his face.  Embarrassed we took a sip of the hot coca-cola in front of him as though it was a new fad in America: hot coca cola for breakfast.

On Day Two we meet the inspiration for Inspector Clouseau in the rocking suspense thriller: Nice is not nice….