Somehow I think this soon-to-be posh stationary store is targeting a shorter clientele than the tall young lady with the wiener dog, don’t you? When I first moved to this area, Walnut Creek was a sleepy mid-sized town built over farmland previously used for. . . yup, you got it.  Growing nuts.  Hey, it’s California – what did you expect? Now it’s almost a city.

Last month I posted pictures of an outdoor stage being readied for a show. Well, guess what?  My friend and I walked over one Sunday and saw the matinee. 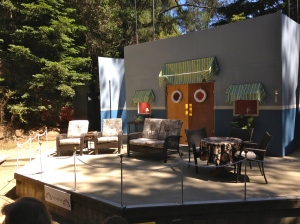 Moments before the show.

On a sizzling day in bright sunshine, you have to stretch your imagination because the climatic scene takes place late at night. The show, Murder on the Nile by Agatha Christie, is a whodunit set entirely on the deck on a cruise ship (the audience is actually sitting in the Nile).  Between scenes we were asked by the director to pretend it was lights out as they played Egyptian music and moved props around the stage.

They handled the issue of intermission by having the character who’d just been shot leap to his feet and yell  “Intermission!”

According to the director’s note, the play was almost blacklisted in London. The reason: the cast included a maid and the Ministry of Labour objected. It’s hard to imagine an Agatha Christie play being offensive to anyone, isn’t it?

Check out other ThursdayDoors over at Norm Frampton’s place.