From the solemn gloom of the temple
children run out to sit in the dust,
God watches them play
and forgets the priest.
– Rabindranath Tagore

On an unstable day filled with hail bursts and wind gusts and a lightening strike or two, I watched Bill Maher’s movie Religulous.  It was, in a word, horrifying.  A horrification most likely amplified by the weather. Luckily the tree which always threatened to wipe out our house in such weather is gone.  Sadly, so is neighbor who refused to chop it down. But I didn’t do it.  Honest.  His was a natural death.

Bill Maher is a comedian with a nighttime talkshow which is, like all talkshows these days, highly politicized. He’s also famous for being an outspoken atheist and pot smoker.  Religulous (an anagram of religious and ridiculous) is basically about people whose beliefs cannot be swayed by any amount of logic. I don’t know how he rounded those folks up. That must have been some casting call.

I’ve known and worked with Muslims, Jews, Sufis, Hindus, Witches, Satanists, Atheists, Agnostics and Transpeople of all varieties.  Not to mention a plethora of Christians.  Most did not feel the need to convince me that their path was the only one.  Oh, one particular Charismatic Catholic claimed that God had a message for me through her and it wasn’t good news. But since she specialized in only channeling dire warnings from the Supreme Being about my fate in the hereafter, I didn’t pay much attention. Although when you’re a child, it’s always upsetting to be bullied by God’s Special Whisperer.

Which brings me back to, how did Bill Maher find so many people who have no doubt they are absolutely right? The Bible was written by God; Mary was a virgin, Jonas lived in a whale and Jesus never had sex.  And if you doubt any one of these “facts” you are going to hell, even if you follow the commandments to the letter. 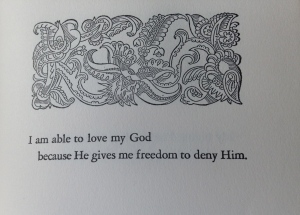 To me, this is intolerance and bullying. Because. . .

I hope your celebration of spring is full of love and completely devoid of any discussion of hell.

18 thoughts on “From the Solemn Gloom of the Temple”