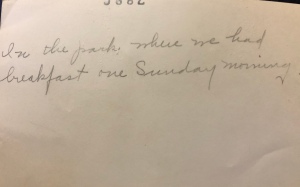 It’s dark and rainy here and will be for the foreseeable future.  Jesus and Guillermo are in the basement removing asbestos (our furnace was condemned) and the cost of removing all of those sixty year old ducts and hopefully getting warm again has dulled the excitement of Santa Claus’ arrival. And so instead of filling the airwaves with uplifting stories and holiday cheer I’ve been on a grim mission to track down and label dead ancestors.

On the back of this picture is written: In the park where we had breakfast one Sunday morning. 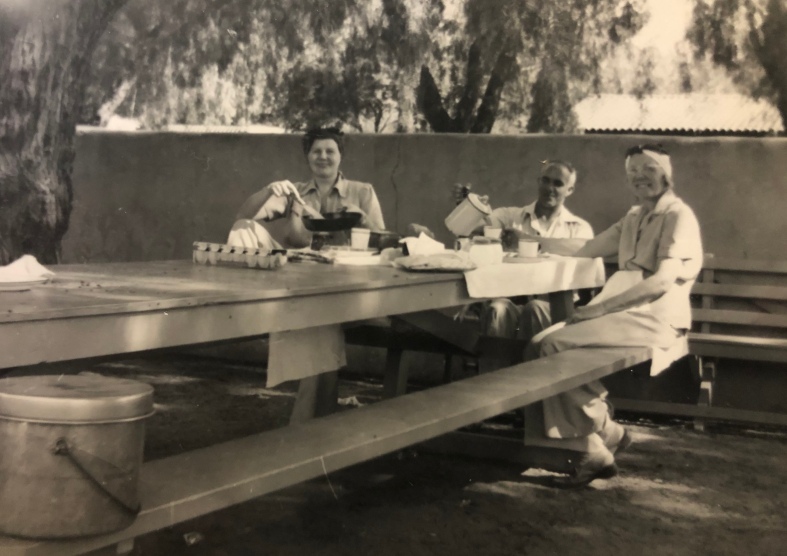 I’m guessing the woman wearing a head scarf and the man pouring the coffee are my great aunt Millie and her husband Ben.  I met them at least a couple of times when I was quite young and vividly recall thinking Ben was too handsome to be sentenced to life in a wheelchair. Shallow, I know but I was in the Disney princess stage.  As to how Ben came to be in a wheelchair, time has dulled my mother’s memory.  Was it WWI or polio?  Who knows. 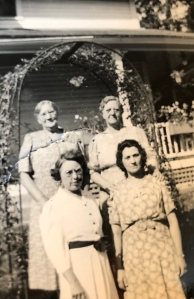 This picture, and several others of a similar ilk, have nothing written on the back.  Nothing.  The bespectacled young woman in the front row, with the “you gotta be kidding me” look on her face, is my grandmother.  She was probably only sixteen but that look never changed.  I believe one of the two elderly women is my great-grandmother but mother can’t tell which one.

Mother:  “I was dead before my grandmother was born.”

Me: “No mother.  I think you meant to say she was dead before you were born.  You’re still alive.”

“One of them could be Mrs. Pease,” she suggests, a neighbor lady who looked after her grandfather after his wife’s death.

“Which lady is Mrs. Pease? You must remember her.”

“I only remember their cow.  We used to bring it down to the barn so that Mr. Pease could milk him.”

“I remember the cow.” 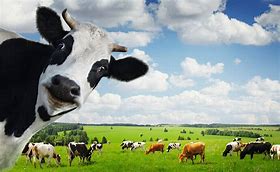 I don’t know if you’ve ever played “identify the ancestor” with someone who can’t remember what day it is … but five minutes is my limit.  Of course, to a five year old all old ladies look alike but a cow – who could possibly forget their first crush, even if it was on a cow? 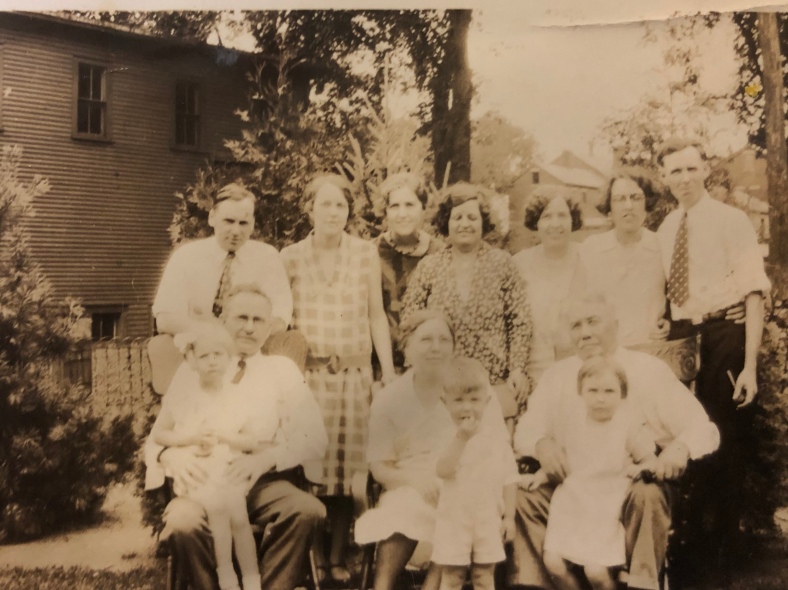 Unlike his daughter, my great grandfather seemed only too happy to have his picture taken.  In this gathering he’s the fella sitting on the right with a little girl on his lap.  The couple behind him are my grandparents and thus the little girl must be my mother. So who is the elderly lady sitting next to great gramps?  She can’t be his wife because we’ve already established that she died before my mother was born.  She must be that friendly neighbor lady, Mrs. Pease.

After comparing the two photographs  I believe Mrs. Pease is the lady on the right (below) which means the lady standing behind my grandmother could be my great grandmother. 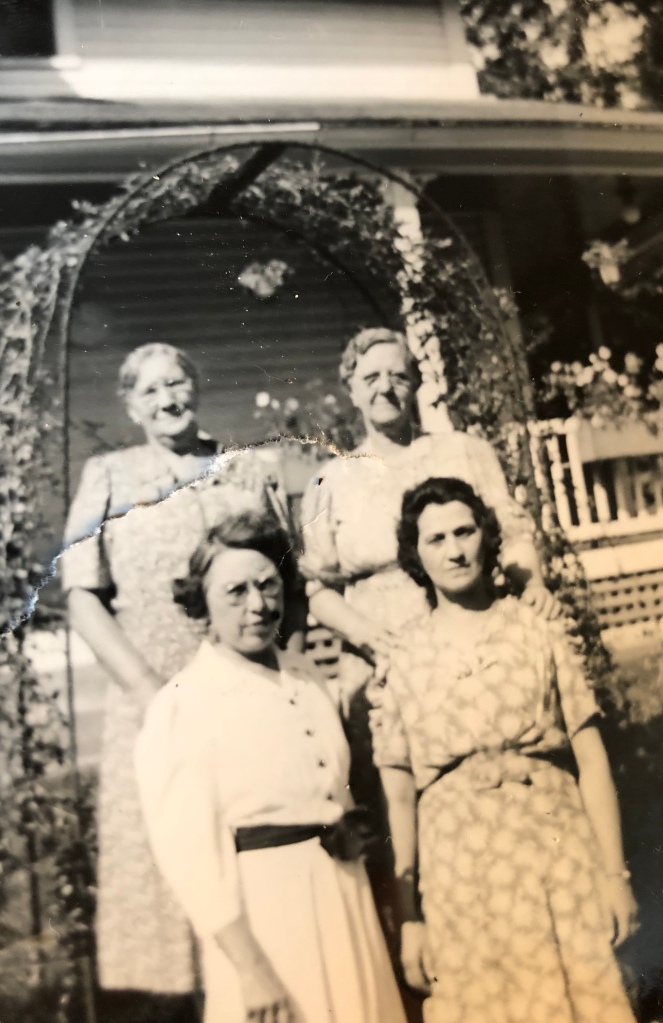 What do you think?

This assumption gained new legs when I compared photos of my great aunt Millie (from the Sunday picnic breakfast scene) through the years. 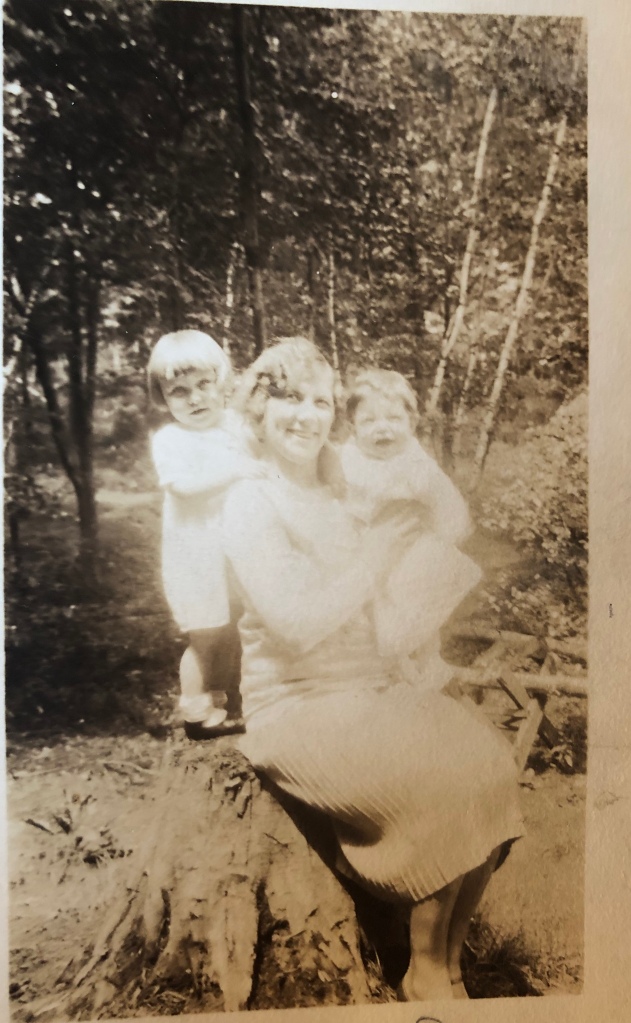 Here she is with my mother and uncle, aged 2 1/2 and 18 months respectively.

And years later at my mother’s wedding (on the left).

Yup, I’m reasonably sure I’m right although I’ll never really know.  All I know for sure is that one Sunday morning long ago three people had breakfast in a park somewhere and apparently that’s how they wanted to be remembered.