There are some movies I will watch again and again for just one scene.

In the movie The Darkest Hour, Winston Churchill rides the Underground for the first time as his advisors urge him to surrender to the Nazis. The bulk of the British army is surrounded at Dunkirk and the Americans are refusing to join the fight. Surrender seems to be the only way to avoid catastrophic defeat. Those politicians on the side of surrender have talked themselves into believing they can come to reasonable terms with a depraved madman but Churchill knows otherwise. 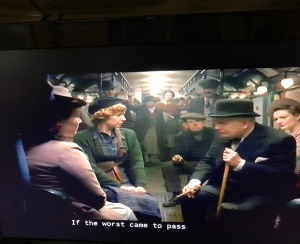 The scene I love in that movie opens with Churchill gazing out at ordinary Londoners trying to escape the rain from his limousine. It’s a stark reminder that wars are begun by men in chauffeur-driven limos but it’s the man on the street who pays the price. Suddenly he disappears. When next seen he is trying to figure out the system map much to the surprise of the commuters. Aristocrats don’t ride the Underground everyday. Once they warm up to him, he asks how they feel about surrendering to Germany and to a man, woman and even a child they say “Never Surrender.” 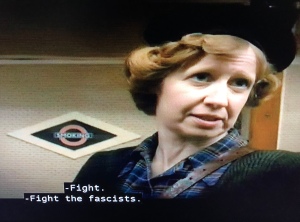 And of course Churchill weeps and I wept along with him.

After the movie I made the mistake of watching the news. Good grief.  Today a senate committee questioned some muleheaded nincompoop determined to stonewall them unless he could expound upon the dignity of human life (code speak for “take away a woman’s right to choose.”)  Any time a committee member came up with a reasonable question about his credentials, some jackass from the other party interrupted their time by yelling “point of order” which actually had nothing to do with order but had more to do with defending a nincompoop put into enormous power by a madman and I wanted to yell “NEVER SURRENDER” loud enough that it could be heard in Washington D.C.

On a lighter note, here are a few favorite scenes from movies I’ll take the time to watch just for a few unforgettable scenes:

There are many more of course.  And we need them these days, we surely do.  Is there a movie you’d watch again just for one scene or am I the only one addicted to sentimentality?

32 thoughts on “Never surrender to nincompoops or madmen”